Under pressure: a new dimension for the periodic table 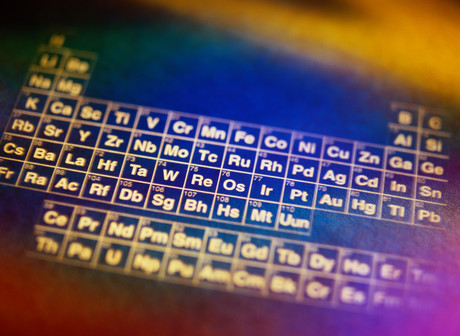 A study led by Chalmers University of Technology has added an extra dimension to the periodic table of the elements, offering a new set of principles for materials research.

Published in the Journal of the American Chemical Society, the study maps how both the electronegativity and the electron configuration of elements change under pressure. Primarily, it means it is now possible for materials researchers to make quick predictions about how certain elements will behave at different pressures, without requiring experimental testing or computationally expensive quantum mechanical calculations.

“Currently, searching for those interesting compounds which appear at high pressure requires a large investment of time and resources, both computationally and experimentally,” said Assistant Professor Martin Rahm, who led the study.

“As a consequence, only a tiny fraction of all possible compounds has been investigated. The work we are presenting can act as a guide to help explain what to look for and which compounds to expect when materials are placed under high pressure.”

Together, electron configuration and electronegativity are important for understanding how atoms react with one another to form different substances. At high pressure, atoms which normally do not combine can create new, never-before-seen compounds with unique properties. Such materials can inspire researchers to try other methods for creating them under more normal conditions, and give us new insight into how our world works.

“At high pressure, extremely fascinating chemical structures with unusual qualities can arise, and reactions that are impossible under normal conditions can occur,” Asst Prof Rahm said. “A lot of what we as chemists know about elements’ properties under ambient conditions simply doesn’t hold true any longer. You can basically take a lot of your chemistry education and throw it out the window! In the dimension of pressure there is an unbelievable number of new combinations of atoms to investigate.”

A well-known example of what can happen at high pressure is how diamonds can be formed from graphite. Another example is polymerisation of nitrogen gas, where nitrogen atoms are forced together to bond in a three-dimensional network. These two high-pressure materials are very unlike one another. Whereas carbon retains its diamond structure, polymerised nitrogen is unstable and reverts back to gas form when the pressure is released. If the polymer structure of nitrogen could be maintained at normal pressures, it would without doubt be the most energy dense chemical compound on Earth.

Asst Prof Rahm and his colleagues have now theoretically predicted how the nature of 93 of the 118 elements of the periodic table changes as pressure increases from 0 pascals up to 300 gigapascals (GPa). 1 GPa is about 10,000 times the pressure of the Earth’s surface, while 360 GPa corresponds to the extremely high pressure found near the Earth’s core. Technology to recreate this pressure exists in different laboratories, for example, using diamond anvil cells or shock experiments.

The work was done using a mathematical model, in which each atom was placed in the middle of a spherical cavity. The effect of increased pressure was simulated through gradual reduction of the volume of the sphere. The physical properties of the atoms in different stages of compression could then be calculated using quantum mechanics.

Currently, several research groups use high pressures to create superconductors — materials which can conduct electricity without resistance. Some of these high-pressure superconductors function close to room temperature. If such a material could be made to work at normal pressure, it would be revolutionary, enabling, for example, lossless power transfer and cheaper magnetic levitation.

“First and foremost, our study offers exciting possibilities for suggesting new experiments that can improve our understanding of the elements,” Asst Prof Rahm said. “Even if many materials resulting from such experiments prove unstable at normal pressure, they can give us insights into which properties and phenomena are possible. The steps thereafter will be to find other ways to reach the same results.

“In addition to facilitating for high-pressure material synthesis on Earth, our work can also enable a better understanding of processes occurring on other planets and moons — for example, in the largest sea in the solar system, many miles under the surface of Jupiter’s moon Ganymede. Or inside the giant planets, where the pressure is enormous.”