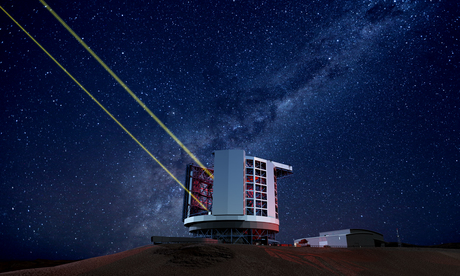 Atop a remote mountain in the Chilean Andes, construction on the Giant Magellan Telescope (GMT) is about to begin.

Set to be the biggest optical telescope in the world, housed in a dome 22 storeys high, the GMT will produce images 10 times better than the Hubble Space Telescope. It will consist of seven mirrors, each 8.4 m in diameter, which reflect light onto a secondary system made of flexible mirrors that will compensate for the distortion caused by the atmosphere, effectively taking the twinkle out of stars.

“An enormous amount of work has gone into the design phase of the project and development of the giant mirrors that are the heart of the telescope,” said Dr Patrick McCarthy, interim president of the GMT Organisation.

It is anticipated that the telescope’s observations of faint stars and distant galaxies will help astronomers better understand their formation, as well as gain insight into dark matter and dark energy.

The GMT is the result of an international collaboration between 11 institutions — situated in Australia (through ANU), Brazil, the US, the Republic of Korea and Chile — who unanimously approved construction of the telescope in June this year. ANU Professors Matthew Colless Ian Young attended the ground-breaking ceremony for the telescope, held at Las Campanas Observatory in Chile’s Atacama Desert, earlier this month.

“It is wonderful that we are now in a position to actually start construction,” said Professor Colless, director of ANU’s the Research School of Astronomy and Astrophysics. “The GMT will be one of the most powerful scientific facilities of the 21st century.”

With the ground-breaking ceremony now completed, the project is on track to begin operations in early 2021. Dr McCarthy said, “We are looking forward to bringing the components of the telescope together on the mountain top.”