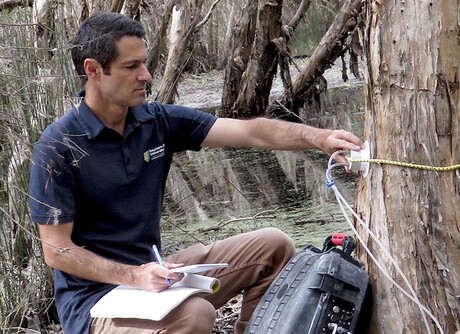 Scientists from Southern Cross University (SCU), in collaboration with Monash University and The University of Melbourne, have uncovered an unlikely microscopic ally in the battle to reduce the amount of methane gas in the atmosphere — a methane-eating microbial community living in the bark of the common Australian paperbark tree (Melaleuca quinquenervia). Their breakthrough has been published in the journal Nature Communications.

Methane is a very potent greenhouse gas — about 45 times more so than carbon dioxide. While trees help lock up carbon dioxide during photosynthesis, this latest research reveals that some trees also play an important role in regulating the methane gas cycle.

“This is a groundbreaking discovery that opens up a whole new area of research about novel microbes living in the bark of trees and their role in regulating methane,” said SCU postdoctoral researcher Dr Luke Jeffrey, lead author on the new study. “It suggests that our scientific understanding of the global methane cycle may need a rethink.”

Dr Jeffrey and colleagues made the discovery while on a field study in wetlands on the far north coast of NSW. SCU’s Professor Scott Johnston explained, “When we first saw large amounts of methane coming out of the bark of Melaleuca trees, we wondered whether there might be bacteria residing in bark making an easy living by eating the abundant methane. Now we know.”

The microbes were found to mitigate a large proportion of the methane released from the trees, consuming about one-third of total methane emissions. With this newfound knowledge, land managers, decision-makers and future climate change mitigation strategies can be better advised in ways to maximise carbon sequestration in forests and avoid potential and unwanted methane emissions.

“It took more than three years of careful experiment design and systematic method development to identify the microbes and resolve their role in consuming methane,” said SCU’s Professor Damien Maher. “It represents an exciting new frontier in our understanding of how trees influence methane in the atmosphere.”