QUT joins the search for ancient life on Mars 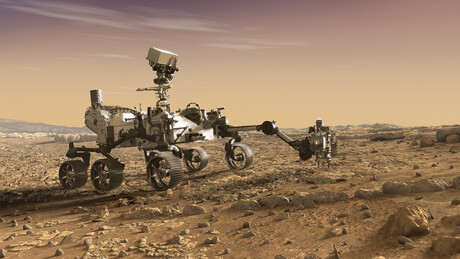 Queensland University of Technology (QUT) has been commissioned by NASA to develop software to crunch the complex geochemical data that will be captured by the Perseverance rover during its mission to search for ancient life on Mars. The new software agreement extends QUT’s participation in the mission, which also includes the involvement of staff and students, and is part of a larger project in which QUT researchers will develop software for the Perseverance rover for work extending through the prime mission in 2023.

Adjunct Professor David Flannery, a former NASA scientist now based at QUT, is a member of the Perseverance rover’s science team, a Long Term Planner for the mission and a co-investigator of one of the exploration instruments the rover will be equipped with — an X-ray fluorescence spectrometer known as PIXL (Planetary Instrument for Lithochemistry). This will be used to map the elemental composition of Mars rocks in features as small as a grain of sand.

The rover is due to land on Mars in February next year, for a mission that is expected to last at least one Mars year (687 Earth days). With the rover set to touch down in the geologically rich, 45 km-wide Jezero crater — which was once flooded with water and has landforms that date back several billion years — Prof Flannery and his team are hoping to find biosignatures of past life in the ancient rock record that represent fossilised microbes.

“One of the best known microbial biosignatures are stromatolites, which form when microbes get together in a mat, and typically over long periods of time build up these larger structures as the mat precipitates minerals, traps bits of sand and cements them together,” Prof Flannery said.

“So if we saw these stromatolites on Mars we would be really excited. It is a definite possibility because there are elements of that crater lake that could preserve fossils like this.”

Prof Flannery is currently working with colleagues at NASA’s Jet Propulsion Laboratory (JPL), and with QUT staff and students, in the study of early life in ancient Australian rocks to help guide Perseverance in its mission to find evidence of past life on Mars. He explained, “Here on Earth we will be looking at rocks that are similar to the rocks we have at the landing site, and studying them with the same techniques we will be using on the rover.

“In Australia, in the really old rocks that we have, we can see clear evidence that microbes were inhabiting shallow water environments.

“So, when we go through the process of studying these rocks on Mars, we can guide the study of these rocks based on what we’ve learned on Earth.”

Plans for space missions to retrieve rocks from Mars for scientific study back on Earth date back to the 1970s, but there are complexities involved in the undertaking. Before future missions can bring any rocks back from the Red Planet, scientists need to identify and cache rock samples that are most likely to give key insights — and that is the focus of this mission.

“The mission has several extremely ambitious goals — including searching for past life in Jezero crater, caching samples that will be returned to Earth and paving the way for human missions,” Prof Flannery said.

A tumour-like coral disease is prevalent in the reef systems around the Cocos Keeling Islands,...

Doctors may be able to more accurately confirm concussions by measuring mRNA in a person's...