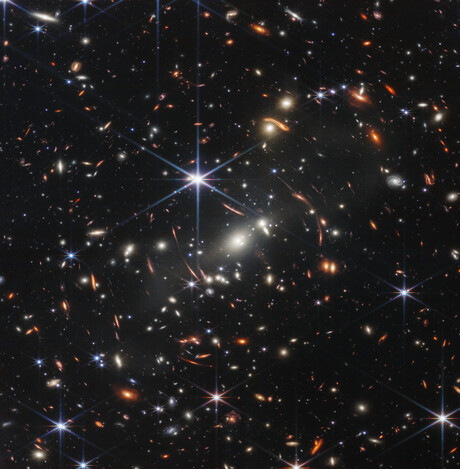 US President Joe Biden has released the first full-colour image from NASA’s James Webb Space Telescope, during a public event held on the evening of Monday, 11 July (Tuesday morning Australian time) at the White House in Washington. This first image showcases the powerful capabilities of the Webb mission, a partnership with the European and Canadian Space Agencies.

The James Webb Space Telescope (JWST) is the world’s premier space science observatory, set to solve mysteries in our solar system, to look beyond to distant worlds around other stars and to probe the mysterious structures and origins of our universe and our place in it. The telescope launched on 25 December 2021, on an Ariane 5 rocket from Europe’s Spaceport in French Guiana, South America. After completing a complex deployment sequence in space, Webb underwent months of commissioning where its mirrors were aligned and its instruments were prepared for science.

The telescope has now produced the deepest and sharpest infrared image of the distant universe to date, one which reveals thousands of galaxies — including the faintest objects ever observed in the infrared. This deep field, taken by Webb’s Near-Infrared Camera (NIRCam), is a composite made from images at different wavelengths, totalling 12.5 hours — achieving depths at infrared wavelengths beyond the Hubble Space Telescope’s deepest fields, which took weeks.

The image shows the galaxy cluster SMACS 0723 as it appeared 4.6 billion years ago. The combined mass of this galaxy cluster acts as a gravitational lens, magnifying much more distant galaxies behind it. Webb’s NIRCam has brought those distant galaxies into sharp focus — they have tiny, faint structures that have never been seen before, including star clusters and diffuse features.

“Webb’s First Deep Field is not only the first full-colour image from the James Webb Space Telescope, it’s the deepest and sharpest infrared image of the distant universe so far,” said NASA Administrator Bill Nelson.

“This image covers a patch of sky approximately the size of a grain of sand held at arm’s length. It’s just a tiny sliver of the vast universe.”

This image is among the telescope’s first full-colour images; three more images are due to be released at 12.30 am AEST on Wednesday, 12 July. With these and other images no doubt set to follow in future, as Webb seeks the earliest galaxies in the universe, researchers will soon begin to learn more about these galaxies’ masses, ages, histories and compositions.