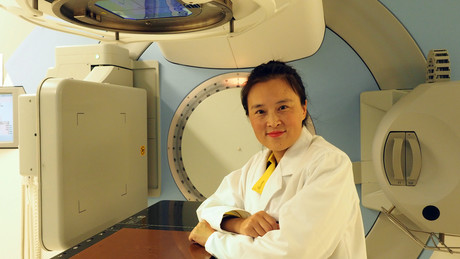 Researchers from the ARC Centre of Excellence for Nanoscale BioPhotonics (CNBP) have developed drug-filled nanobubbles that can be triggered in the body by X-rays, paving the way for a new range of cancer treatments for patients.

The tiny bubbles, known as liposomes, are commonly used in pharmacology to encapsulate drugs, making them more effective in the treatment of disease. As explained by Dr Wei Deng, an associate investigator at the CNBP, “The development and application of various nanomaterial designs for drug delivery is currently a key focus area in nanomedicine.

“Liposomes are already well established as an extremely effective drug delivery system,” Dr Deng continued. “Made out of similar material as cell membranes, these ‘bubbles’ are relatively simple to prepare, can be filled with appropriate medications and then injected into specific parts of the body. The issue, however, is in controlling the timely release of the drug from the liposome.”

Now, Dr Deng and her fellow scientists have been able to engineer these liposomes to discharge their drug cargo on demand, once activated by standard X-rays. Initial testing, conducted at Macquarie University and published in the journal Nature Communications, has shown the technique to be highly efficient in killing bowel cancer cells.

“The approach we took was to embed gold nanoparticles and the photosensitive molecule verteporfin into the wall of the liposome. The radiation from the X-ray causes the verteporfin to react and to produce highly reactive singlet oxygen which then destabilises the liposomal membrane, causing the release of the drug.

“The gold nanoparticles are added into the mix as they focus the X-ray energy. This enhances the singlet oxygen generation and hence improves the speed of the membrane breakup.” 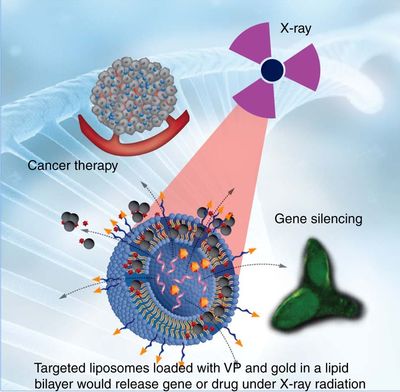 The schematic illustration of gene silencing and cancer cell-killing by X-ray-triggered liposomes. This liposomal delivery platform incorporates verteporfin (VP) and gold nanoparticles. Two types of cargos, antisense oligonucleotide and Doxorubicin, are respectively entrapped inside a liposomal middle cavity for demonstration of in vitro gene release and in vivo drug delivery. Image courtesy of the study authors under CC BY 4.0

CNBP Deputy Director Professor Ewa Goldys, senior researcher on the project, said the new liposome was shown to successfully kill cancer cells in a laboratory setting, stating, “Our X-ray triggered liposomes were loaded with the chemotherapy drug doxorubicin, which killed the cancer cells far more effectively than without X-ray triggering.

“We then tested our liposomes to determine effectiveness against bowel tumours. Tumours treated with our liposomes gradually shrunk over the two-week test period, which is an extremely encouraging result.”

So why have the results been so promising? Professor Goldys explained, “Currently, radiotherapy — where X-rays kill cancer cells — and chemotherapy are typically given to patients separately.

“Our method makes it possible to perfectly synchronise both treatments so they can be given simultaneously. This enables enhanced therapeutic outcomes with potentially reduced doses of drug and/or radiation required because of this exquisitely precise timing of drug release.”

Professor Goldys said her team will continue to work on optimising the modified liposomes with the aim of moving to first-in-human clinical trials, which will involve further toxicology work, a scaling up of the liposome manufacturing process and the development of clinical protocols required for regulatory approval.