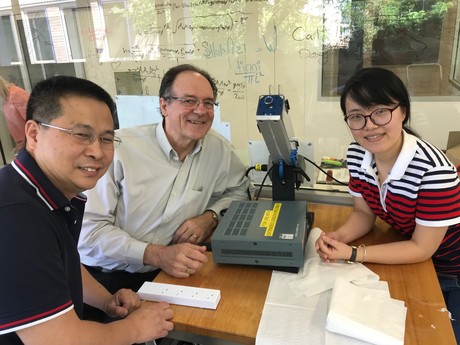 The future of biomarkers is looking bright, with Flinders University researchers shining a light on new ‘green’ compounds for medical applications.

The functional materials, using carbon nanotubes and an organic polymer, have been subjected to simple laser and heat treatments using the Flinders-developed vortex fluidic device (VFD) — a film flow chemical reactor that harnesses high shear forces, micro-mixing and reactions beyond diffusion to produce a range of industrial and experimental compounds including biodiesel, folded proteins, carbon nanotubes, mesoporous silica and pharmaceuticals.

Professor Raston first used the VFD to ‘unfold’ egg proteins in collaboration with US scientists — and won the 2015 Ig Nobel prize for chemistry for his efforts. Since then, the machine has been used to rapidly spin a range of chemicals in water-soluble and other non-toxic liquids, significantly reducing the cost and environmental harm in a range of chemical processes.

“We are excited to find yet more applications for the VFD, to improve green chemistry in processing raw materials such as carbon nanotubes — one of the world’s strongest materials,” said Professor Raston.

“These new fabrication processes being pioneered at Flinders apply the principles of green chemistry to use more benign oxidants and avoid toxic reagents and harsh chemicals, which is attractive to industry and much better for the environment.”

The two latest developments, published this week in the journals ChemPhotoChem and Reaction Chemistry & Engineering, respectively involve modifying an organic polymer (polyethylenimine, or PEI) into polymer nanoparticles and multiwalled carbon nanotubes or carbon ‘nanodots’ under continuous sheer flow in the VFD.

“Made fluorescent in the device, these materials have reduced cytotoxicity and have potential in different areas of medicine, for example, in staining cells and incorporating DNA in them,” said researcher Xuan Luo, a co-author on both studies.

“Biomedical scientists here at the Flinders, and also the Centre for Nanoscale Science and Technology, plan to use this innovative new laser and thin liquid flow processing to deliver and develop other processes for pharmaceutical manufacturing in the future.”

Producing more affordable and effective functional biomarkers paves the way for improved catalysis, bioimaging, biosensing and drug delivery, according to the researchers. In addition, significant improvement in fluorescence could improve results from both complex and routine medical tests.

Professor Raston and his colleagues have described the latest discoveries as potentially groundbreaking, with further research now looking at raising fluorescence and scaling up for further applications in the areas of DNA delivery and cell transfection.