Chemical analysis from a smartphone 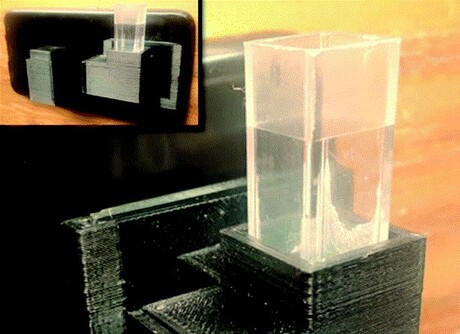 Researchers from Spain’s University of Alicante and Argentina’s Universidad Nacional del Sur have designed and validated a low-cost 3D-printed device that, when connected to a smartphone, makes it possible to conduct chemical analyses. Described in the journal RSC Advances, the technology presents a simple solution for onsite testing in developing countries or remote locations — without the need to step into the laboratory or access advanced technology.

Smartphones have a wide range of possibilities beyond everyday applications. In addition, 3D-printed devices are becoming more accessible and allow us to create not only simple parts but also complete determination systems. The research team’s device was developed by using 3D printing technology and employing a smartphone camera as a capture device to complete the determination.

In particular, the tests have revealed the concentration of quinine in tonic drinks, as well as concentrations of sulfate in drinking water samples below the maximum values allowed by European Council Directive 98/83/EC. The sulfate determination has been carried out by nephelometry using a red LED, while the quinine was determined using a blue LED with fluorimetry.

According to the researchers, there are currently no similar devices on the market; some items have been described in the scientific literature as having similar features but not covering both fluorimetric and nephelometric analytical techniques. The system thus offers enormous potential for in situ environmental, biochemical and food control determinations, with possible applications including chemiluminescent reactions and reading paper-based analytical microdevices. The device could also be adapted to any type of smartphone.