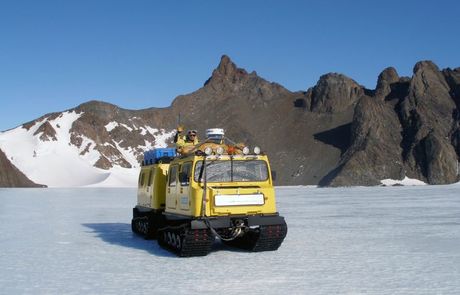 The United States will install cutting-edge equipment, designed and built at La Trobe University, at its South Pole scientific research station in January next year. The $500,000 rooftop dome spectrometer measures both auroras and airglow, the latter of which is usually invisible to the human eye.

Using a fish-eye lens, the instrument observes the entire sky simultaneously, mapping wind and temperature variations across a region about 1500 km in diameter. Coupled with the latest in computerised image processing, it scans from 15° above the horizon to a full 90°.

The equipment will be deployed at the South Pole to study a hard-to-reach part of the Earth’s atmosphere — between 100 and 400 km above the pole — which is too high for aircraft and weather balloons and too low for satellites. There, it will be used to measure shifts in the wavelength of light emitted from this region.

“This will provide us with information about the effects of space weather and high-altitude winds which can impact on communications, surveillance and navigation systems, such as GPS, and the operation of low-altitude satellites,” said La Trobe physicist Theo Davies.

Davies, who helped design the equipment, will accompany it to the US Amundsen-Scott South Pole Station, leaving for Antarctica on 12 December. With two colleagues from Alaska and South Africa, he will spend two months in Antarctica, installing and commissioning the system and preparing it to collect scientific data during the Antarctic winter.

The spectrometer will work in tandem with two other instruments, one at Australia’s Davis Station and another at the US McMurdo Station in Antarctica. La Trobe has also played a key role in their design and construction.

Fast, on-site detection of PFAS in the environment

Curtin University researchers have developed a new on-site method to immediately and accurately...

A prototype medical imaging device can produce images down to resolutions of 1 to 2 µm...

Microscopic samples made to glow in the dark

Researchers have discovered a way to more accurately analyse microscopic samples by essentially...