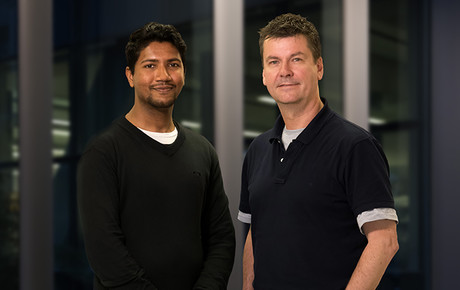 A hand-made super-microscope has enabled Monash researchers to decipher how bacteria are able to build a wall against the immune system.

It is “a big step in knowing how these bacteria form a wall against the immune system — and also a big step towards stopping the superbugs in their tracks,” according to Professor Trevor Lithgow from the Monash Biomedicine Discovery Institute.

One of the keys to understanding antimicrobial-resistant superbugs is to see in great detail the outer surface that they present to the human immune system. Lithgow’s team has accomplished the first nanoscale interrogation of the wall of the bacteria Escherichia coli (E. coli) — discovering highly organised precincts of ‘beta-barrel assembly machines’ — that build the bacterial cell surface.

Super-resolution microscopy, which won its developers the Nobel Prize in 2014, is a technique that can see beyond the diffraction of light, providing unprecedented views of cells and their interior structures and organelles.

“Toby and his team, including then PhD student Donna Whelan, were amazing in what they installed at the Monash Micro Imaging facility,” Professor Lithgow recalled.

While there are other super-resolution microscopes elsewhere, Professor Lithgow believes it is unusual to have one tailor made to look at the landscape of a bacterial cell wall.

Critical to the five-year project was the work of then Monash BDI PhD student, and co-first author Dilshan Gunasinghe. “Dilshan pushed the technology to its limit through the preparation of samples of bacteria and working with analyst Keith Schulze, who rewrote the software so the microscope could drill down to the nanoscale,” Professor Lithgow said.

The project brought together biochemists, microscopists, physicists, biologists and computer programmers to visualise what had never been seen before, in what “will provide researchers with key knowledge to disarm superbug resistance to the immune system”, Professor Lithgow said.

Findings have been published in Cell Reports.

Chemical analysis from a smartphone

Researchers have designed and validated a low-cost 3D-printed device that, when connected to a...

Scientists have developed an ultrastable, selective catalyst to dehydrogenate propane without...