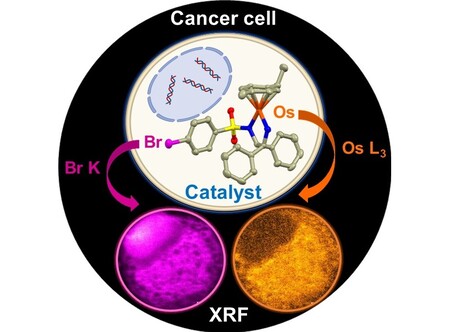 Using a 185 m beamline at the Diamond Light Source synchrotron, researchers from the University of Warwick successfully observed how osmium, a rare precious metal that could be used for cancer treatments, reacts in a single human lung cancer cell. Published in the journal Angewandte Chemie, this is a major step forward in discovering new anticancer drugs.

Currently, half of anticancer drugs used in chemotherapy contain the metal platinum. Once inside the cancer cell this reacts in the nucleus, which may lead to undesirable side effects. Osmium, on the other hand, is a rare metal that might be useful as a new cancer treatment with fewer side effects. Warwick researchers used the 185 m beamline to track osmium in a single cancer cell at a scale of 100 nm.

Using a hard X-ray nanoprobe beamline, the researchers observed how osmium reacted in a single lung cancer cell. However, the reactivity of osmium is determined by its coating (its ligands), so they monitored the ligands too in the same XRF experiment by labelling them with bromine. Once the osmium was in the cell, researchers observed that it stayed in the cytoplasm, whereas the ligands entered the nucleus — potentially indicative of dual attack on the cancer cell.

“Osmium is a rare precious metal; however, since it can act as a catalyst, a very little amount is needed for reactions in the cancer cell,” said Professor Peter Sadler from the University of Warwick. “Therefore, it could be a sustainable treatment going forward.

“We wanted to see how exactly it worked in a single cancer cell, which involved a variety of novel techniques, including taking water molecules out of the cell and rapidly flash-freezing it. Whereas usually cells are chemically altered to see the reactions, in our method they are close to their natural state, making our results more authentic.”

“We worked 24 hours a day, five days a week to collect these exciting data, allowing us to see inside cancer cells to a nanoscale resolution,” added Warwick’s Dr Elizabeth Bolitho. “This has provided crucial insights into potential cellular targets of such osmium catalysts.

“Not only were we able to track the osmium in a lung cancer cell, but more widely in breast cancer, ovarian and prostate cancer cells, for example, which provides hope that in the future osmium could be used to treat a range of different cancers.”

Prof Sadler concluded, “Our team hopes to progress their discoveries through preclinical development towards new osmium drugs for cancer treatment, although this typically takes several years. If we succeed, then the days and sleepless nights spent collecting XRF data at the Diamond synchrotron will certainly have been worthwhile.”

Image caption: Detection of an anticancer compound in a cancer cell; the pink is the bromine and orange is osmium. Image credit: University of Warwick.