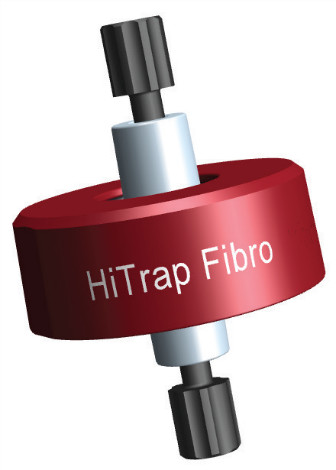 Today the main technique for chromatographic purification uses highly porous microscale beads. These beads have a functionalised surface to allow discrimination of the target product from the complex process stream. For example, with a protein A ligand on the bead surface, monoclonal antibody (mAb) purification is mediated via an affinity interaction.

When these beads are placed in a 96-well plate format (eg, PreDictor plates) and coupled with the most efficient chromatography platforms currently available, the results can be invaluable for automated early screening work. Through enabling a large array of conditions to be scouted with reduced material and time costs (1). However, the requirement for specialised liquid handling equipment and robust bridging experiments to translate to process scale can be considered a disadvantage.

Fibre-based Fibro chromatography offers an alternative. Below, results from two high-throughput units are presented — research-scale and 96-well. The units are based on established protein A ligands that are immobilised onto cellulose fibre adsorbent mounted in polypropylene housing, called Fibro units in these studies (2).

We evaluated research-scale protein A functionalised Fibro chromatography units capable of purifying ~10 mg of monoclonal antibody in a primary capture mode in a 2 min chromatography cycle, with capacity independent of flow rate (Fig 1). Figure 2 displays how operating at high flow rates and in smaller scales allows full process development to be carried out quickly, with sufficient material generated to perform material characterisation studies. 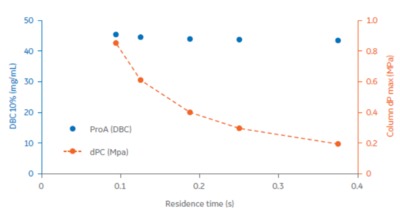 The Fibro adsorbent material is designed to operate in a rapid cycling mode, with each unit capable of being cycled >100 times in a single working shift. The units are being developed to handle mAb quantities for the scale up to large industrial processes. Learn More about Fibro.

The following case study covers the process development of a primary capture step on an industrially relevant mAb, varying process conditions such as pH, concentration of elution and post-load wash buffers, and flow rate.

High-throughput buffer screening for a protein A chromatography step

An initial set of design of experiments (DoE) studies, examining which factors have the most influence upon the elution profile including buffer strength, pH and flow rate during elution, determined that concentration of elution buffer had the most significant effect. A full investigation of effect of buffer strength on elution profile, including interaction with post-load wash buffers, was carried out with a monoclonal antibody (mAb 1) supplied by GlaxoSmithKline (GSK), Gunnels Wood Road, Stevenage, Herts, SG1 2NY UK.

Chromatography runs were performed on ÄKTA avant 150 at a flow rate of 15 mL/min, 37.5 matrix volumes (MV)/min, 1.6 s residence time (for equilibration, loading, post-load washing, and elution on a 0.4 mL matrix), with each full cycle taking 2 min. Buffers for post-load wash and elution were varied as shown in Table 1, using two matrix volumes of each buffer.

The load for each run was 4 mL of mAb 1 at 1 g/L, with each combination of wash and elution buffers run in duplicate. Results were reported from the integration of the chromatograms using the automated integration feature of the UNICORN 7.0 software, with peak area (mAU/mL) values comparing recovery.

Results are reported in Tables 2 and 3. Percent recovery is defined by the area of the elution peak, and the peak width in column volumes gives us the pool volume of the eluate. The speed of the pH transition is determined by the relative buffer strength of the wash and elution buffers, with the fastest transitions giving the sharpest peaks. The strongest buffers give the smallest peak width for elution. However, when considering post-protein A process steps, for example, post-viral hold, cation exchange (CEX), and anion exchange (AEX) chromatography, it is worth noting that the higher buffer strength eluent pool will require a greater volume of titration buffer to raise the pH, thus resulting in a lower overall eluent pool concentration. The data also appears to show that acetic acid is a less favourable elution buffer, especially at lower concentrations, because the recovery is significantly lower, indicating that the required pH for optimal elution is not reached.

The low-pH intermediate wash steps speed up pH transition as expected, but in the case of the higher molarity buffers, it appears that the wash is starting to elute material, adversely affecting recovery. The most favourable combination for mAb 1 appears to be 50 mM sodium acetate at pH 5.5 for wash, with a 100 mM sodium acetate elution buffer at pH 3.5. These conditions gave a recovery of 89%, with a peak width of 3.8 column volumes (CV). Duplicate runs of the 64 experimental conditions were completed in 4.5 h, demonstrating the power of this tool for HTPD. These results also highlight key conditions for further process development optimisation with the Fibro adsorbent PD units being developed for scalable industrial performance. 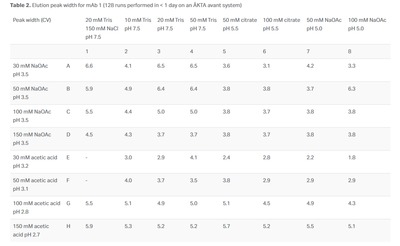 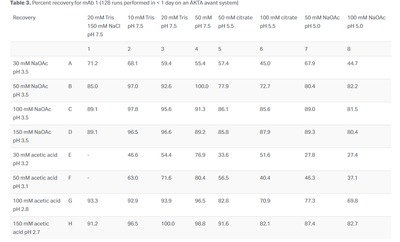 We have demonstrated the utility of Fibro adsorbent material in different HTPD applications. Very small quantities of adsorbent can yield a great deal of data and process development understanding. This is due to the immediate mass transfer observed with the Fibro adsorbent material, meaning less complexity when scaling up. The scalability criterion of the unit format means that methods can be easily scaled.

Small, scalable units enable a range of process parameters to be explored with minimal feed requirements. Units can be cycled up to 200 times to add confidence to repeats and adsorbent lifetime understanding, as well as produce meaningful amounts of material for further study. All units can be run on standard ÄKTA systems. The 96-well format could be used where carryover might be an issue, for example, in cell line selection, foulant material, static studies (long buffer holds, base stability, etc.). The 96-well format fits seamlessly into Te-Chrom-enabled Tecan liquid handling platforms.

In this technical note brought to you by SCIEX, a series of experiments were conducted to test...

By following the maintenance recommendations introduced in this article, you will experience how...

The SCIEX Triple Quad 7500 LC-MS/MS System is QTRAP ready, and designed to achieve high levels of...