No 94 m track for the London Olympics

Do you remember the Australian mockumentary The Games that satirised the bureaucracy behind the Sydney Olympics? One episode revolved around the 100-metre athletics track, which it turned out was only 94 metres long. Even a decade later, the YouTube clip ‘The Games : The 100 Metres track’  is very funny. However, such things should not happen at the London Olympics as the National Institute of Standards and Technology (NIST) is providing distance calibration.

NIST recently calibrated a tape that will be used to measure out the distance of this summer’s Olympic marathon - a distance of 26 miles, 385 yards - to 1 part in 1000.

Measurement is a vital aspect of the Olympic Games. Officials measure the height of jumps, the speed of races and the mass of weights to determine who wins a medal and who goes home. The marathon is no different. Because of the difficulties in measuring out the distance, the International Association of Athletic Federations (IAAF) only recognised best times and didn’t begin awarding world records for marathons until 2004 when a method using a device called a Jones Counter was officially recognised as sufficiently accurate.

Developed by a father-son duo in the early 1970s, the Jones Counter is a simple geared device that counts the revolutions of a bicycle wheel. To calibrate the device, course measurers lay out a calibrated measuring tape at least 30 metres in length. Once they have determined the number of revolutions that equal that distance - and a couple of successively longer distances - they follow painstaking procedures for laying out the rest of the course. The measurements, which can take hours to complete, will ensure that the shortest distance a runner will run will be at least the required distance and no more than about 40 metres over, corresponding to an error of about 1 part in 1000.

Chris Blackburn, a physical science technician with NIST’s Semiconductor and Dimensional Metrology Division, says this calibration wasn’t terribly difficult, but it was a little unusual because the tape that the course measurer wanted calibrated was 100 metres long, 40 metres longer than the NIST ‘tape tunnel’, so they had to do the calibration in sections. 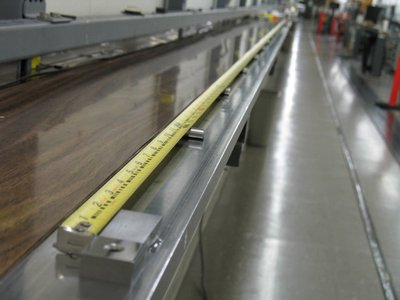 “The uncertainties associated with our laser interferometer system are very small,” says Blackburn. “And by applying the proper tension on the tape to pull it straight and keeping the temperature at 20°C, plus or minus 15 hundredths of a degree, we achieve uncertainties of 0.00018 metres, which meets or exceeds our customers’ requirements in most cases.”

Blackburn’s group performs about 40 calibrations annually, mostly for the petroleum and measuring tape manufacturing industry. While the effort that goes into each calibration varies depending on several factors, including tape construction and tape length, most can be completed in a few hours.

The IAAF chose David Katz of Finish Line Road Race Technicians and his friend and collaborator Hugh Jones to help perform the measurements, and Katz in turn contacted NIST to perform the calibration of the tape that they used to calibrate their Jones Counters. After making the temperature corrections and compensations for the error that NIST found in the tape (13 mm over 100 m), Katz and Jones found that their measurements of the marathon course disagreed by 1.3 to 2 metres over the entire distance.

“I was thrilled with the result,” says Katz. “This level of agreement, with a difference of about 2 centimetres per mile, is pretty remarkable. This measurement was my gold medal.”

This is not the first time that NIST has been asked to help out with Olympic-sized measurement problems. For instance, in 2002, NIST worked with Winter Olympics officials to calibrate and test the photoelectric timers used in bobsled and luge races, showing that they were accurate to within less than half a millisecond.

How blockchain can transform life sciences

There is a great opportunity for life sciences to demonstrate blockchain's problem-solving...

Propelling the digital lab in the revolution of AI

Why rugged laptops are a good alternative in laboratories

Working with consumer-grade tools can often leave lab workers frustrated or stymied because those...