AI can identify cancerous cells by their acidity 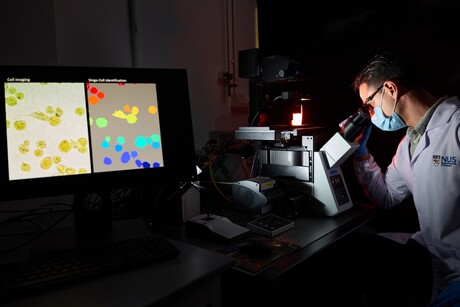 Healthy and cancer cells can look similar under a microscope, but one way of differentiating them is by examining the level of acidity, or pH level, inside the cells. Tapping on this distinguishing characteristic, researchers from the National University of Singapore (NUS) have developed a technique that uses machine learning to determine whether a single cell is healthy or cancerous by analysing its pH.

Current techniques for examining a single cell can induce toxic effects or even kill the cell. The approach developed by the NUS team, however, can distinguish between cells originating from normal and cancerous tissue, as well as among different types of cancer. All of these can be achieved while keeping the cells alive, as the researchers explain in the journal APL Bioengineering.

The team’s method relies on applying bromothymol blue — a pH-sensitive dye that changes colour according to the level of acidity of a solution — onto living cells. Due to its intracellular activity, each type of cell displays its own ‘fingerprint’, which consists of its own unique combination of red, green and blue (RGB) components when illuminated. Cancer cells have an altered pH compared to healthy cells, so they react differently to the dye, and this changes their RGB fingerprint.

Using a standard microscope equipped with a digital colour camera, the RGB components emitted from the dye inside the cells are captured. By using an AI-based algorithm they developed, the researchers were able to quantitatively map the unique acidic fingerprints so that the cell types examined can be easily and accurately identified. Thousands of cells originating from various cancerous tissues can be imaged simultaneously, and single-cell features can be extracted and analysed. Compared to current standard methods of cancer cell imaging which require several hours, the process developed by the NUS team can be completed in less than 35 min.

“Unlike other cell analysis techniques, our approach uses simple, inexpensive equipment and does not require lengthy preparation and sophisticated devices,” said research leader Professor Lim Chwee Teck, Director of the Institute for Health Innovation & Technology (iHealthtech) at NUS. “Using AI, we are able to screen cells faster and accurately. Furthermore, we can monitor and analyse living cells without causing any toxicity to the cells or the need to kill them. This would allow for further downstream analysis that may require live cells.”

The research team is now planning to develop a real-time version of this technique where cancer cells can be automatically recognised and promptly separated for further downstream molecular analysis, such as genetic sequencing, to determine any possible drug treatable mutation. They are also exploring the possibility of performing the real-time analysis on circulating cancer cells suspended in blood.

“One potential application for this would be in liquid biopsy, where tumour cells that escaped from a primary tumour can be isolated in a minimally invasive fashion from bodily fluids such as blood,” Prof Lim said. The group is also looking forward to advancing their concept to detect different stages of malignancies from the cells tested.

“The ability to analyse single cells is one of the Holy Grails of health innovation for precision medicine or personalised therapy,” Prof Lim said.

Image caption: The simple and low-cost technique can accurately monitor and analyse living cells without causing any toxicity to the cells or the need to kill them.