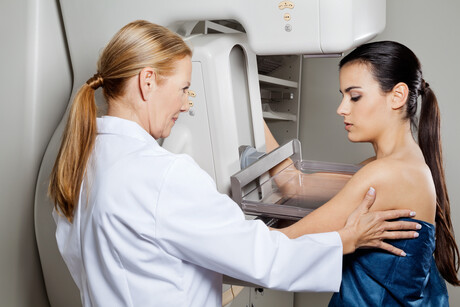 A PhD student at the University of Canterbury (UC), Haipeng Li, has spent the last three years working on computational algorithms that can automatically read and analyse mammogram X-rays — with the aim of helping radiologists to detect warning signs of breast cancer.

The algorithms Li has developed, with UC Professor Ramakrishnan Mukundan and radiologist Dr Shelley Boyd at Pacific Radiology in Christchurch as his supervisors, have been shown to accurately detect two markers linked to increased risk of breast cancer. Li hopes the research will eventually help radiologists identify cancers at an early stage, when they can be treated more successfully.

Mammography is a widely accepted imaging method used for routine breast cancer screening around the world and can detect about 80–90% of breast cancer cases before symptoms appear. But while Li acknowledged that “early detection through routine mammograms plays an important role in preventing breast cancer deaths”, he said that “reading and interpreting suspicious regions in mammograms is repetitive and challenging work”.

“I also tested over 700 mammogram images for mammogram density and obtained classification accuracy of 92% and 87% on two public mammogram datasets,” Li said. “Very few computerised classification systems being used overseas have accuracy rates of more than 80%, so it’s a very significant achievement.”

Prof Mukundan said computerised approaches are increasingly being used internationally for interpretation and analysis of diagnostically relevant features in X-rays, and that Li’s research makes significant contributions to the field by performing a comprehensive texture analysis of mammographic features for microcalcification detection and breast density estimation. Dr Boyd added that detection of microcalcification from mammograms is a major part of breast cancer diagnosis.

Li hopes his proposed automated algorithms will feed into computer-aided detection and diagnosis (CAD) systems in the future, though he says further improvements and evaluations are needed before the tool could be used in a clinical setting.

“We’re aiming to reach 98% accuracy,” he said. “Some improvements are needed in the current algorithms to extract more detailed image information for specific biomarkers and I hope to work more closely with local hospitals and radiologists to achieve even better results.”

Papers detailing Li’s medical imaging algorithms research have been presented and published at five international conferences, and one was a finalist for the best student paper award at the International Conference on Control, Automation, Robotics and Vision 2020 conference in China.