A team of Australian engineers at the University of New South Wales (UNSW) has demonstrated a quantum bit based on the nucleus of a single atom in silicon, promising dramatic improvements for data processing in ultrapowerful quantum computers of the future.

Quantum bits, or qubits, are the building blocks of quantum computers, which will offer enormous advantages for searching expansive databases, cracking modern encryption and modelling atomic-scale systems such as biological molecules and drugs. When coupled together, these qubits will give rise to exponential increases in computing speeds.

The world-first result, published today in Nature, brings these machines one step closer, describing how information was stored and retrieved using the magnetic spin of a nucleus.

“We have adapted magnetic resonance technology, commonly known for its application in chemical analysis and MRI scans, to control and read out the nuclear spin of a single atom in real time,” said Associate Professor Andrea Morello from the School of Electrical Engineering and Telecommunications (EE&T) at UNSW.

The nucleus of a phosphorus atom is an extremely weak magnet which can point along two natural directions - either ‘up’ or ‘down’. In the strange quantum world, the magnet can exist in both states simultaneously - a feature known as quantum superposition.

The natural positions are equivalent to the ‘zero’ and ‘one’ of a binary code, as used in existing classical computers. In this experiment, the researchers controlled the direction of the nucleus; in effect, ‘writing’ a value onto its spin and then ‘reading’ the value out - turning the nucleus into a functioning qubit.

“We achieved a readout fidelity of 99.8%, which sets a new benchmark for qubit accuracy in solid-state devices,” said UNSW Scientia Professor Andrew Dzurak, who is also director of the Australian National Fabrication Facility at UNSW, where the devices were made. 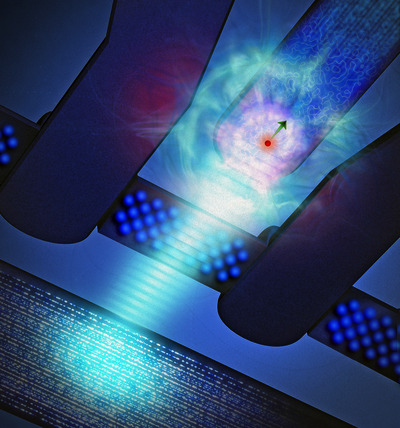 Artist’s impression of a single phosphorus atom, placed in the vicinity of a silicon transistor. The atom is irradiated by microwaves to write quantum information on the spin of its nucleus, indicated by the arrow. (Photo credit: Tony Melov.)

The accuracy of the UNSW team’s nuclear spin qubit rivals what many consider to be today’s best quantum bit - a single atom in an electromagnetic trap inside a vacuum chamber. The development of this ‘ion trap’ technology was awarded the 2012 Nobel Prize in physics.

“Our nuclear spin qubit operates at a similar level of accuracy but it’s not in a vacuum chamber - it’s in a silicon chip that can be wired up and operated electrically like normal integrated circuits,” said Morello. “Silicon is the dominant material in the microelectronics industry, which means our qubit is more compatible with existing industry technology and is more easily scaleable.”

Morello’s PhD student Jarryd Pla is the lead experimental author of the work, which was conducted in collaboration with the groups led by Dzurak and Professor David Jamieson at the University of Melbourne. Morello, Dzurak and Jamieson are all program managers in the ARC Centre of Excellence for Quantum Computation and Communication Technology.

In September 2012, the same UNSW team reported in Nature the first functional quantum bit based on an electron bound to a phosphorus atom embedded in silicon, ‘writing’ information onto its spin and then ‘reading’ the spin state back out.

With their latest result, the team has dug even deeper into the atomic structure to manipulate and measure the spin of its nucleus. This is the core of an atom, containing most of its mass, but its diameter is only about one-millionth that of the atom’s diameter.

“This means it’s more challenging to measure, but it’s almost completely immune to disturbances from the outside world, which makes it an exceptional quantum bit,” said Pla. “Our nuclear spin qubit can store information for longer times and with greater accuracy. This will greatly enhance our ability to carry out complex quantum calculations once we put many of these qubits together.”

Electron spin qubits will likely act as the main ‘processor’ bits for quantum computers of the future, coupled with other electrons to perform calculations. But nuclear spin qubits could also be integrated and could provide a useful memory function or help implement two-bit logic gates between the electronic qubits, the researchers say.

Demonstrating quantum memories and two-qubit logic gates is the main focus of the UNSW team for the near future. They are also exploring ways of improving the accuracy of their nuclear and electron spin qubits even further by moving to a purer form of silicon.

Using a VR headset, the user has a complete universe of cell populations in front of them and can...