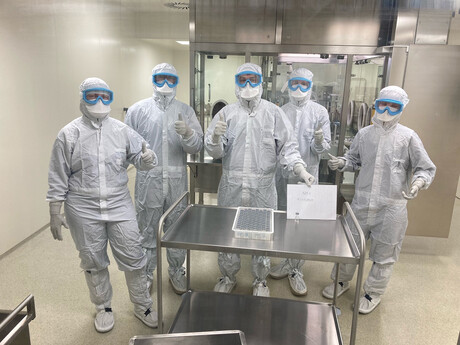 Researchers at the Fraunhofer Institute for Toxicology and Experimental Medicine ITEM have developed a production method that fast-tracks the passage of biopharmaceuticals from the lab to clinical trials — from as long as two years to just six months.

The COVID-19 pandemic has underlined just how vital it is to speed up the development and release of new drugs, yet reality paints a different picture. The development of a suitable bioprocess and the pilot production for a protein-based drug candidate can take anything between 18 months and two years. Only then can clinical development begin — and with many candidates eliminated in the first or second phase of clinical studies due to low tolerability or lack of efficacy, it is of the utmost importance to obtain these clinical results as quickly as possible.

Researchers from the Division of Pharmaceutical Biotechnology at Fraunhofer ITEM have now been able to significantly accelerate the process — from the discovery of a new mechanism of action to the preparation of a new investigational medicinal product ready for clinical trials. As explained by Professor Holger Ziehr, Director of the Division of Pharmaceutical Biotechnology, the team’s approach to bioprocess engineering was born of necessity, in response to the COVID-19 pandemic.

“Anyone looking to develop a human antibody for treating SARS-CoV-2 is very much in a race against time,” Prof Ziehr noted. “A period of 18 months to two years is simply too long. That was what led us to opt for a different production strategy, so that suitable candidates for a new active substance can progress to clinical studies much more quickly.”

Development of the strategy

Like most other antibody production processes, the process developed at Fraunhofer ITEM is based on Chinese hamster ovary (CHO) cells. Around 80% of all biotechnologically produced pharmaceutical-grade proteins are produced with the help of this cell line. One of the principal reasons for this is that the sugar chains, which in the CHO cells are attached to a newly synthesised protein, are similar to those of humans.

In order to produce antibodies, the genetic material from this antibody — ie, its DNA, which contains the corresponding antibody gene — must be introduced into CHO cells. “For this, we use so-called plasmids,” Prof Ziehr said. “These are ring-shaped DNA molecules, which are introduced into the CHO cells by means of a process known as transfection.”

This process of transfection takes place in a vessel containing a few millilitres of a liquid nutrient and millions of cells. The plasmids are then added to this culture, where they penetrate the cells and then randomly integrate into the chromosome. The composition of the liquid nutrients ensures that only those cells that have incorporated the antibody gene multiply.

In the conventional approach, the tedious next step is to isolate and test individual cells until a CHO cell clone displaying optimal integration of the antibody gene within its genome is identified. This is an extremely time-consuming process, since it can take as long as 48 hours for a single cell division.

“This means that a year can easily pass before a usable clone is available,” Prof Ziehr said. “That’s far too long, especially if the aim is to develop a drug for COVID-19. We therefore opted to dispense with the lengthy process of cell isolation and work directly with the cell pool from transfection.

“This meant accepting the risk that some of the cells would have incorporated the genetic information from the antibody much more successfully than others. However, the selection conditions applied to the cell pool were such that the cells that produced the most antibodies were also the ones that grew best. Some cells produced more antibodies, others somewhat fewer, but all of them produced the same antibody.”

The risk paid off — the result is a stable cell pool that grows well and produces, as a whole, a large number of antibodies. In just six months, researchers were able to harvest a large quantity of pharmaceutical-grade monoclonal antibodies using this method and prepare 3500 doses for clinical trials. Furthermore, the process can be used for almost any kind of pharmaceutical-grade protein. It has therefore created a completely new business model in the field of pharmaceutical biotechnology for Fraunhofer ITEM.

Disinfecting PPE for reuse and recycling

In response to a global shortage of PPE, Dr Yvonne Anderson started researching a method for...