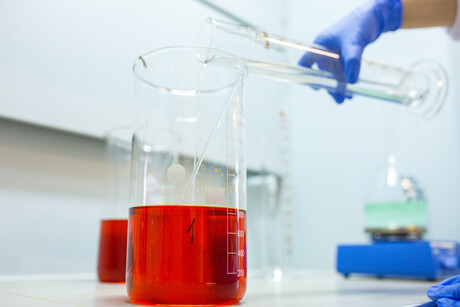 Additionally, solutes will be more soluble if the molecules in the solute are smaller than the ones in the solvent. This is because it is more difficult for solvent molecules to surround bigger molecules.

Solubility guidelines*
*Pertains to substances in water at room temperature and standard pressure.

Using the chart below, the empirical formula of the compound can be used to determine solubility by cross referencing the cations (top row) with anions (first column). 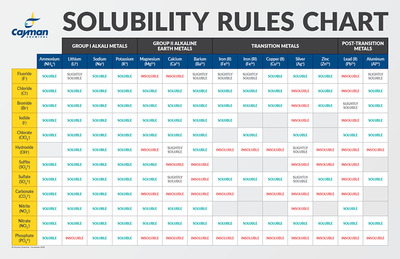 All solvents exist on a continuum of polarity. Solvents can be classified as polar, which contain bonds between atoms with very different electronegativities (such as O-H), and nonpolar, which contain bonds between atoms with similar electronegativities (such as C-H). As explained in detail below, polar solvents are classified as protic or aprotic. Polar protic solvents can form hydrogen bonds with water to dissolve in water and are best for dissolving polar reactants such as ions. Nonpolar solvents are not capable of strong hydrogen bonds and are better used for dissolving nonpolar reactants such as hydrocarbons.

One way to measure polarity is through quantifying the dielectric constant (or relative permittivity) — the factor by which the electric field between two points of charges in the material is decreased relative to vacuum. The greater the dielectric constant, the greater the polarity. Solvents with dielectric constants less than five are considered nonpolar. A more direct way to measure polarity is by quantifying the dipole moment (or partial charges). Polar solvents have large dipole moments since they contain bonds with different electronegativities. Nonpolar solvents will lack partial charges and have little to no dipole moment. The below solvent polarity scale was derived from Reichardt’s dye to represent solvent polarity in correlation with chemical kinetics and equilibria (Sherwood, J. Bio-based solvents for organic synthesis, 2014).

Polar solvents are either protic or aprotic

Polar protic solvents solvate cations and anions effectively and participate in hydrogen bonding since they possess O-H or N-H bonds. Polar protic solvents can participate in reactions serving as a source of protons (acid), removing protons (base), or donating a lone pair of electrons as a nucleophile. They are most often used as the solvent for their conjugate bases. For example, water is used as a solvent for hydroxide ions.

Polar aprotic solvents are not capable of hydrogen bonding. They only serve as a reaction medium and do not solvate nucleophiles, which remain relatively free in solution and can become more reactive. Aprotic polar solvents favour reactions where ions are reactants, making them adequate as a general-purpose solvent for many different reactions.

Even when using an appropriate solvent, the solubility of a substance can be affected by the solvent used for crystallization of the compound, residual solvent content, polymorphism, salt versus free form, degree of hydration, solvent temperature, and dissolved oxygen. Because compounds in solution may become unstable, even when the most careful considerations are given to select an appropriate solvent, it is best practice to make fresh solutions for your experiments or store pre-made solutions at -80°C.

Read the full article to learn more about variance in solubility and download handy solubility charts. Cayman also provides solubility data for most biochemical compounds at www.caymanchem.com to help guide you in choosing a solvent.

Researchers have developed a method that fast-tracks the passage of biopharmaceuticals from the...

The rise in demand for face masks has led to global shortages and makeshift solutions. But are...

Buying face shields and PPE amidst COVID-19 is a challenging task, as there are many aspects that...