Cell cultures are not as stable as you think: study 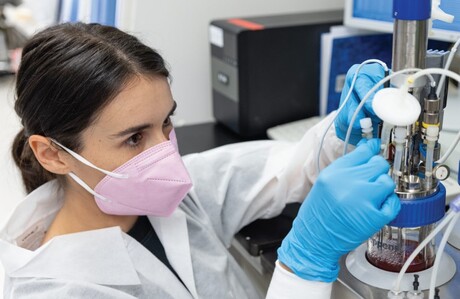 Culture environments of different cell types growing in culture vessels or Petri dishes vary significantly from each other and from conditions in the living body, potentially driving the so-called ‘reproducibility crisis’ in biomedical research, according to bioscientists from King Abdullah University of Science and Technology (KAUST). Their conclusion follows constant monitoring of three different cell types over three days, with the results published in the journal Communications Biology.

The inability to monitor and control cell culture conditions has made it very difficult for researchers to reproduce experiments, which is crucial for confirming the significance and accuracy of scientific findings. As noted by KAUST research scientist Shannon Klein, “Scientists are still discovering the factors that contribute to maintaining an ideal cell culture environment in order to accurately mimic the human body. But it’s not an easy task and requires parallel advances in technology and engineering.”

KAUST researchers led by marine ecologist Carlos Duarte and bioscientist Mo Li monitored the environment of cells grown in flasks placed in a controlled incubator — a standard cell culture method called batch culture — over a three-day period. Three different cell types were used: human pluripotent stem cells, a cancer cell line and a type of white blood cell. Optical sensors were attached to some of the flasks belonging to each cell type in order to monitor changes in dissolved oxygen and carbon dioxide levels as the cells grew. Other flasks were removed every eight hours and then discarded after measuring cell growth rates and culture acidity.

“We were surprised to find the batch-cultured cell environments were many magnitudes different from their native environments in the human body,” said KAUST PhD student Samhan Alsolami.

The extent of changes that occurred in the cultures varied with cell type, but generally, as cell density increased, the amount of oxygen dissolved in the cell medium decreased while carbon dioxide increased. This in turn increased the acidity of the surrounding medium. The different extent to which these changes occurred in each cell type is likely due to differences in cell growth rates and metabolism. These changes will affect cell processes.

“We are now studying the functional consequences of cell culture environmental instability by analysing gene expression and epigenetic and metabolic changes in cells grown under well-defined conditions,” Li said.

The team’s future research will aim to develop recommendations on how to improve culture conditions for different cell types. Meanwhile, the researchers suggest that amendments to existing batch culture protocols — by reducing cell density, for example, or adapting culture vessels — could help limit the changes to within acceptable ranges. Commercially available systems could also be used to continuously dilute cultures with fresh medium or to automatically add gases or adjust medium acidity to maintain cellular environments.

Researchers have created a sprayable coating that can prevent the surface spread of infection...