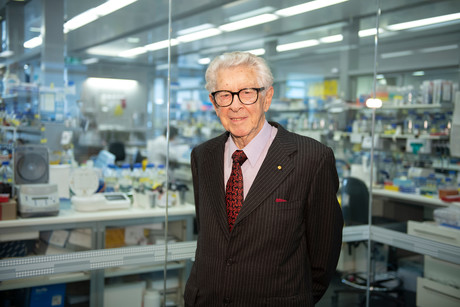 The Lasker Foundation has announced the winners of the 2019 Lasker Awards, widely regarded as America’s top biomedical research prize.

Established in 1942 by Albert and Mary Lasker, the Lasker Foundation seeks to increase support for biomedical research, using initiatives such as the Lasker Awards to recognise the contributions of leaders who made major advances in human disease research. Awards are selected by a distinguished international jury and presented across three categories, each carrying an honorarium of US$250,000. The awards are also considered a good predictor of future Nobel Prize winners, with 86 Lasker laureates going on to receive a Nobel Prize.

The 2019 Albert Lasker Basic Medical Research Award honours two scientists, Max D Cooper and Australia’s own Jacques Miller, who identified and defined the function of B and T cells, uncovering the organising principle of the adaptive immune response. B cells develop in the bone marrow and produce antibodies in response to pathogens, disabling them or tagging them to be destroyed. T cells mature in the thymus gland and help alert B cells to the presence of pathogens; they can also detect and kill infected or abnormal cells.

Miller showed that the thymus, previously thought to be a vestigial organ, is essential for immune function. Cooper then demonstrated that there are two distinct cell lineages in the adaptive immune system: B cells and T cells. Working with chickens, he showed that an avian organ called the bursa of Fabricius is the site where B cells mature and characterised the different stages of B cell development. Miller established that interactions between B and T cells are essential to their normal maturation and function. Later, Cooper and colleagues showed that, in mammals, B cells are generated in the liver of the foetus and the bone marrow after birth. These discoveries serve as the building blocks for current immunology research.

The 2019 Lasker-DeBakey Clinical Medical Research Award was presented to H Michael Shepard, Dennis J Slamon and Axel Ullrich, whose combined efforts culminated in the creation of Herceptin — the first monoclonal antibody therapy that targets a protein encoded by an oncogene; a gene that, when mutated, can cause cancer. Herceptin is a humanised monoclonal antibody, created in mice and then adapted to be tolerated by the human immune system. Monoclonal antibodies are proteins that bind to specific invader organisms or abnormal (eg, cancerous) cells; in Herceptin’s case, it is used to treat HER2-positive breast cancer.

Shepard and Ullrich, then working at Genentech, and Slamon, at the University of California, Los Angeles, conducted complementary research that led to powerful clinical results. Herceptin, when coupled with chemotherapy, stalled HER2-positive breast cancer progression and extended survival compared to chemotherapy treatment alone. The researchers thus provided the first demonstration that monoclonal antibodies were a viable and effective strategy to treat solid tumours, opening a new path to develop and deploy antibodies to treat cancer.

Finally, the 2019 Lasker-Bloomberg Public Service Award went to Gavi, the Vaccine Alliance, for its work to expand global childhood vaccine coverage. Gavi buys vaccines for approximately 60% of children worldwide; by buying vaccines in such large quantities, it can negotiate reduced pricing for drugs while sustaining suppliers. The Alliance has also helped create new delivery infrastructure, from solar-powered refrigerators to drone delivery.

By pooling the resources of private and public partners, Gavi helps to establish and maintain effective immunisation programs, which have generated an estimated US$150 billion in economic benefits through productivity gains and healthcare cost savings. The company has helped vaccinate over 760 million children and save over 13 million lives in 73 countries since its launch in 2000, and ultimately aims to strengthen developing countries’ health systems and help them build self-sufficient immunisation programs.

The awards will be presented on 20 September in New York City.

Applications now open for next Superstars of STEM

The program is about building capacity in the STEM sector so more women have the confidence and...

The program will increase knowledge exchange, capacity building and idea generation between the...

The Academy of Technology and Engineering's 2020 Innovation and Excellence Awards recognised...

Wild yeast, algae and the science of beer and wine