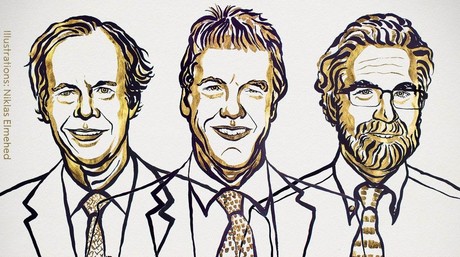 The first of the 2019 Nobel Prizes were announced this week, acknowledging scientists whose discoveries have opened up possibilities for humankind that were previously unfathomable.

On 7 October, the Nobel Assembly at Karolinska Institutet chose to award the 2019 Nobel Prize in Physiology or Medicine jointly to William G Kaelin Jr, Sir Peter J Ratcliffe and Gregg L Semenza for their discoveries of how cells sense and adapt to oxygen availability.

Animals need oxygen for the conversion of food into useful energy. The fundamental importance of oxygen has been understood for centuries, but how cells adapt to changes in levels of oxygen has long been unknown. Kaelin, Ratcliffe and Semenza identified the molecular machinery that regulates the activity of genes in response to varying levels of oxygen — thus revealing the mechanism for one of life’s most essential adaptive processes, establishing the basis for our understanding of how oxygen levels affect cellular metabolism and physiological function, and paving the way for promising new strategies to fight anaemia, cancer and many other diseases.

On 8 October, the Royal Swedish Academy of Sciences awarded the 2019 Nobel Prize in Physics for contributions to our understanding of the evolution of the universe and Earth’s place in the cosmos — with one half to James Peebles for theoretical discoveries in physical cosmology and the other half jointly to Michel Mayor and Didier Queloz for the discovery of an exoplanet orbiting a solar-type star.

The Academy claims that Peebles’ insights into physical cosmology have laid a foundation for the transformation of cosmology over the last 50 years. Using his theoretical tools and calculations, Peebles was able to interpret traces of ancient radiation from the infancy of the universe and discover new physical processes, thus contributing to our understanding of its evolution after the Big Bang. Mayor and Queloz meanwhile started a revolution in astronomy in 1995 when they announced the first discovery of a planet outside our solar system — an exoplanet — orbiting a solar-type star in the Milky Way, thus kicking off the hunt for further unknown planets in our cosmic neighbourhoods.

Finally, on 9 October the Royal Swedish Academy of Sciences decided to award the 2019 Nobel Prize in Chemistry to M Stanley Whittingham, John B Goodenough and Akira Yoshino for the development of lithium-ion batteries — lightweight, rechargeable and powerful devices that are now used in everything from mobile phones to laptops and electric vehicles.

Whittingham laid the foundation for lithium-ion batteries in the 1970s, when he created an innovative cathode in a lithium battery, made from titanium disulfide, which, at a molecular level, has spaces that can house (intercalate) lithium ions. The battery’s anode was partially made from metallic lithium and the battery itself could produce just over 2 V — but metallic lithium is reactive and the battery was too explosive to be viable.

Goodenough predicted that the cathode would have even greater potential if it was made using a metal oxide instead of a metal sulfide, and in 1980 he demonstrated that cobalt oxide with intercalated lithium ions can produce as much as 4 V. With Goodenough’s cathode as a basis, Yoshino created the first commercially viable lithium-ion battery in 1985, replacing the reactive lithium in the anode with petroleum coke — a carbon material that, like the cathode’s cobalt oxide, can intercalate lithium ions. Lithium-ion batteries officially entered the market in 1991.