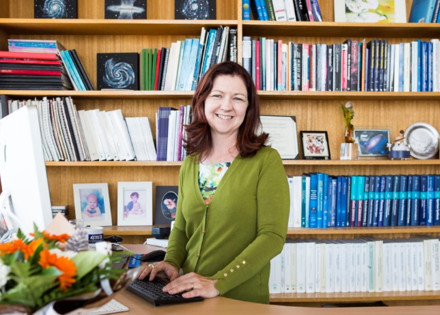 Professor Lisa Kewley (pictured) has been named the recipient of the 2020 James Craig Watson Medal by the US National Academy of Sciences (NAS) for her pioneering contributions to the study of galaxy formation and evolution, making her the first person in Australia and the Southern Hemisphere to be recognised with the major US award in its 133-year history.

Named after 19th-century astronomer James Craig Watson, the medal has been presented every two years since 1887 for outstanding contributions to the science of astronomy. It comprises a US$25,000 personal endowment, US$50,000 for research support and a gold-plated bronze medal.

Prof Kewley received the award for her fundamental contributions to our understanding of galaxy collisions, cosmic chemical abundances, galactic energetics and the star-formation history of galaxies by elucidating key processes in star-forming galaxies, including nebular physics, accretion by supermassive black holes and oxygen enrichment. Among her recent accomplishments, she produced the first models for star-forming galaxies to include a variable temperature and density distribution, developed theoretical models to identify galactic power sources and investigated oxygen distribution left by colliding galaxies.

Her widely cited papers cover the development of theoretical models to identify the power sources of galaxies, deriving the first star-formation rate calibration to correct for chemical abundance, revealing the distribution of oxygen abundances left behind by colliding galaxies, showing that low ionisation nuclear emission-line regions are powered by supermassive black holes, and measuring the oxygen history of the universe.

She has transformed scientists’ understanding of the early years of the universe, the development of galaxies and what happens when they collide. Indeed, the NAS recognised that her research has had an enormous impact on our understanding of how galaxies have formed and evolved over the past 12 billion years.

“Now we understand how to make a computer model of the impact of star formation and supermassive black holes on their host galaxies,” Prof Kewley said. “We can run the model forward and see how we expect galaxies to evolve, and we can go backwards and see how galaxies like the Milky Way formed, shortly after the epoch of reionisation, when the early universe lit up.”

Now researching the oxygen history of galaxies like the Milky Way, Prof Kewley currently serves as Director of the ARC Centre of Excellence for All Sky Astrophysics in 3D (ASTRO 3D) and ARC Laureate Fellow at the Australian National University’s Research School for Astronomy & Astrophysics. She is also a Fellow of the Australian Academy of Science.

“I am deeply honoured to have been awarded the James Craig Watson Medal,” Prof Kewley said. “It speaks to the strength of astronomy in Australia. In pursuing my academic passion, I have been fortunate to be able to collaborate with many talented and insightful scientists. I am also grateful that my work has been supported by the Australian National University, by ASTRO 3D, and by funding bodies such as the Australian Research Council.”