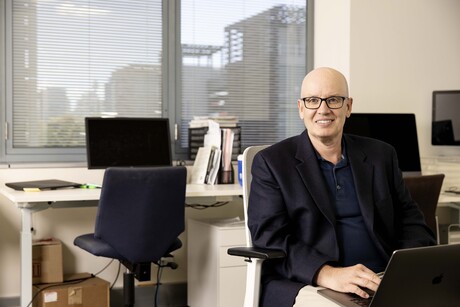 An evolutionary biologist and virologist who played a significant role in the global scientific response to COVID-19 has won this year’s Prime Minister’s Prize for Science.

The Prime Minister’s Prizes for Science have been described as Australia’s most prestigious awards for outstanding achievements in scientific research, research-based innovation and excellence in science, mathematics or technology teaching. Recognising achievements across diverse disciplines and career stages with a total of $750,000 in prize money each year, they serve as a tribute to Australia’s world-class science community, as well as the critical role that teachers play in inspiring the next generation of Australian scientists and innovators. The 2021 awards presentation was held virtually on Wednesday, 3 November.

Professor Edward C Holmes from the University of Sydney received the $250,000 Prime Minister’s Prize for Science for almost 30 years of pioneering research on genome sequencing data, providing invaluable insights into diseases such as HIV, Ebola, SARS and, most recently, COVID-19. Last year Prof Holmes was the first person in the world to publicly share the SARS-CoV-2 genome sequence — which enabled scientists to start vaccine design within days.

“Professor Holmes’ contribution to accelerating the development of the COVID-19 vaccine — doses of hope, as I call them — saved countless lives,” Prime Minister Scott Morrison said.

“For over 20 years, the Prizes have recognised remarkable Australians whose dedication to scientific research and innovation has led the way in shaping the future of our country, and Professor Holmes exemplified why we placed our trust in science to effectively respond to COVID-19.”

The $250,000 Prime Minister’s Prize for Innovation was meanwhile awarded to Professor Anthony Weiss, also from the University of Sydney, for his trailblazing research into synthetic tropoelastin-based biomaterials, which can accelerate and improve the repair of human tissue. In 2008, he founded Elastagen to commercialise his research and inventions; 10 years later the company was sold to biopharma leader AbbVie for $334 million, in one of the largest transactions ever completed in Australia’s life science sector.

Additional prizes presented on the night were as follows:

“I would like to thank this year’s recipients for creating a more productive and more prosperous future for all of us through their research achievements, and for inspiring our next generation of scientists and innovators,” said Minister for Science and Technology Melissa Price.

The Prime Minister concluded, “On behalf of all Australians, congratulations to the scientists, innovators, educators and research organisations being recognised for their dedication to solving the challenges of today and tomorrow.”

The awards ceremony can be viewed in full below.

Recipients across seven categories share $750,000 in prize money and have the opportunity to...

Professors Jamie Cooper and Rinaldo Bellomo were recognised for their innovative research that...