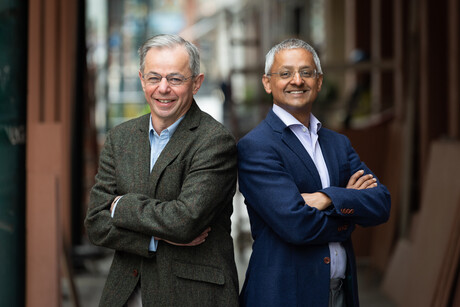 British Professors Shankar Balasubramanian and David Klenerman have been announced as the winners of the prestigious 2020 Millennium Technology Prize, awarded by Technology Academy Finland (TAF).

The global prize, awarded at two-year intervals since 2004 to highlight the extensive impact of science and innovation on the wellbeing of society, is worth €1 million. Of the nine previous winners of the Millennium Technology Prize, three have subsequently gone on to win a Nobel Prize. The 2020 award, whose announcement was delayed due to the COVID-19 pandemic, marks the first time that the prize has been awarded to more than one recipient for the same innovation.

Prof Balasubramanian and Prof Klenerman co-invented Solexa–Illumina next-generation sequencing (NGS) technology, which has enhanced our basic understanding of life by enabling fast, low-cost and large-scale genome sequencing — the process of determining the complete DNA sequence of an organism’s make-up. They then co-founded the company Solexa to make the technology more broadly available to the world.

The NGS method involves fragmenting sample DNA into many small pieces that are immobilised on the surface of a chip and locally amplified. Each fragment is then decoded on the chip, base by base, using fluorescently coloured nucleotides added by an enzyme. By detecting the colour-coded nucleotides incorporated at each position on the chip with a fluorescence detector — and repeating this cycle hundreds of times — it is possible to determine the DNA sequence of each fragment. The collected data is then analysed using sophisticated computer software to assemble the full DNA sequence from the sequence of all these fragments.

NGS provides an effective way to study and identify new coronavirus strains and other pathogens. The technology is being used to track and explore the novel coronavirus viral mutations; has helped the creation of multiple vaccines; and is critical to the creation of new vaccines against new dangerous viral strains. It is also allowing scientists to identify the underlying factors in individuals that contribute to their immune response to COVID-19, which will be invaluable for understanding how to minimise the chances of people developing exaggerated inflammatory responses. Incidentally, the International Selection Committee selected the prize winners in February 2020, before the global spread of COVID-19.

NGS technology has revolutionised global biological and biomedical research and has enabled the development of a broad range of related technologies, applications and innovations. Due to its efficiency, NGS is now being widely adopted in health care and diagnostics, such as cancer, rare diseases, infectious medicine and sequencing-based non-invasive prenatal testing. It is used to define new drug targets for novel therapies for common disease in defined patient groups. NGS has also contributed to the creation of new and powerful biological therapies like antibodies and gene therapies.

In addition to medical applications, NGS has had a major impact on all of biology as it allows the clear identification of thousands of organisms in almost any kind of sample. This is now critically important for agriculture, ecology and biodiversity studies.

“The future potential of NGS is enormous and the exploitation of the technology is still in its infancy,” said Professor Päivi Törmä, Chair of the Millennium Technology Prize Selection Committee. “The technology will be a crucial element in promoting sustainable development through personalisation of medicine, understanding and fighting killer diseases, and hence improving the quality of life. Professor Balasubramanian and Professor Klenerman are worthy winners of the prize.”

Four outstanding Qld women are recognised for their work in STEM, while the Superstars of STEM...