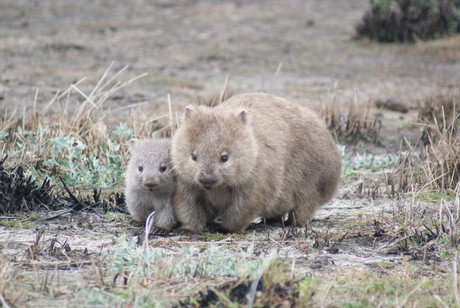 Scientists from the University of Tasmania (UTAS) are among an international research team that recently set out to crack the secret of the unique cubed poo of wombats — and received an Ig Nobel Prize for their efforts.

Presented every year by Improbable Research, the satirical Ig Nobel Prizes are awarded for research that makes people laugh and then think. In the case of the UTAS researchers, they won the 2019 Ig Nobel Physics Prize for investigating a subject that has baffled both bushwalkers and biological scientists for a long time.

“There are many colourful hypotheses to explain the phenomenon, but nobody had ever investigated it,” said UTAS researcher Dr Scott Carver. “This research has been a fun effort to answer the questions of how and why.”

When Dr Carver first sliced open a wombat cadaver, he was surprised by their extraordinarily long intestines — about 10 m long. In contrast, human intestines are only 7 m long.

It is partially because of these long colons that wombat scat is dry, Dr Carver explained. “Human colons are not that long; we don’t pull as much water from faeces.”

The dissections also revealed that the cubes formed in the intestine, dismissing the idea that the cubes are formed at the point of exit from the wombat. The fact that the wombat intestine is not uniformly flexible, with some parts rigid while other parts are soft, further forms the basis of the current hypothesis about the formation of cubed poo.

Dr Carver’s research was one of 10 to receive an Ig Nobel Prize in 2019, whittled down from approximately 9000 nominations. Other 2019 award winners are as follows: