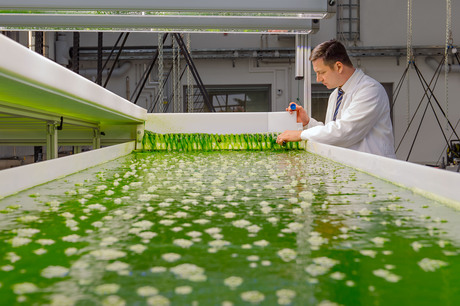 The Technical University of Munich (TUM) has built a technical facility for algae cultivation at the Ludwig Bölkow Campus in Ottobrunn, south of Munich, in cooperation with Airbus Group. The facility will develop efficient processes for producing biokerosene and chemical products from algae.

Scientists estimate that there are some 150,000 different types of algae, yet only around 5000 of them have been fundamentally characterised and 10 of these have been implemented for commercial exploitation. With their new algae facility, TUM researchers aim to change this.

“While the production of biofuels from corn implies a problematic competition between nutritional use and fuel,” said Thomas Brück, Professor for Industrial Biocatalysis at TUM, “algae also grow in salt water and require neither arable land nor pesticides. Still, they can generate up to 10 times higher yields per hectare and year.” 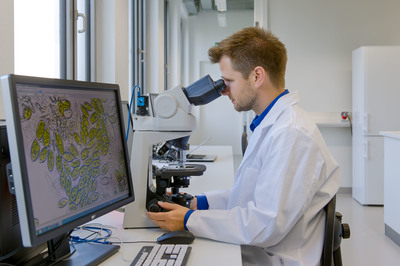 Given this untapped potential, Airbus Group and the Bavarian Ministry of Education, Cultural Affairs, Science and the Arts are sharing the costs of just over €10 million for the TUM facility and its equipment. The 1500 m2 building houses three areas for algae cultivation, as well as laboratory and office space.

The building’s facade comprises highly transparent glass that also lets ultraviolet light pass through. Elaborate climate technology ensures that both tropical and very dry climate conditions can be created. Two different climate zones can be simulated in the two outer halls. The middle hall is geared to cultivation and preparatory experiments. 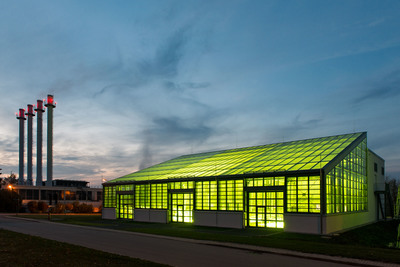 Additional LED lighting enables the simulation of light and climate conditions of practically any location on Earth. These highly efficient LEDs provide light in the 300 to 800 nm wavelength range and an intensity distribution that closely mimics that of sunlight. Since the different LED types can be individually controlled and adjusted, researchers can also configure specific spectra that differ from that of the sun.

“No-one can predict whether or not a specific alga from the South Pacific will be just as productive in Germany as it is in its native environment,” said Professor Brück. “In the same vein, no-one knows whether species which are successful in Bavaria would function as well in the light conditions of the Sahara, but now we can test all of this in our technical facilities.” 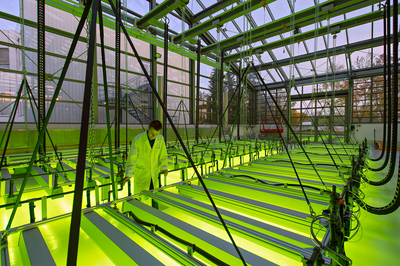 Cultivation is not limited to just one type of photo-bioreactor. Various open and closed systems can operate in parallel in the halls, under the same or different climate conditions. Thanks to the facility’s elaborate building automation systems, the algae centre’s operations are highly energy efficient.

“With this algae centre, we are providing science with a research facility that is unique worldwide,” said Bavarian Science Minister Dr Ludwig Spaenle. “At the same time, it is also a strategic investment into the economic region of Bavaria. After all, only through permanent innovation can we thrive in the face of worldwide competition.”