Looking at light from a different angle

Researchers from Massachusetts Institute of Technology (MIT) have produced a system that allows light of any colour to pass through it if this light is coming from a specific angle. Their study has been published in the journal Science.

While it has long been possible to selectively filter light according to its colour or polarisation, “Light selection based purely on the angle of propagation is a long-standing scientific challenge,” the researchers said. “In angularly selective systems, however, the transmission of light usually also depends on the light frequency.”

The researchers developed a structure consisting of a stack of ultrathin layers of two alternating materials where the thickness of each layer is precisely controlled. The study’s co-author, Marin Soljačić, stated, “When you have two materials, then generally at the interface between them you will have some reflections.” At these interfaces, he said, “there is this magical angle called the Brewster angle, and when you come in at exactly that angle and the appropriate polarisation, there is no reflection at all”. 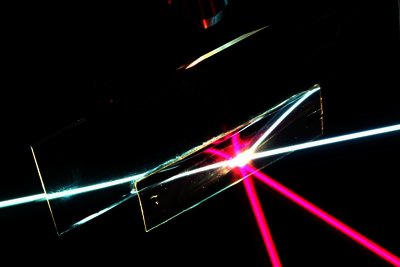 In this photo of the angular-selective sample (the rectangular region), a beam of white light passes through as if the sample was transparent glass. The red beam, coming in at a different angle, is reflected away, as if the sample was a mirror. The other lines are reflections of the beams. (This set-up is immersed in liquid filled with light-scattering ­particles to make the rays visible.) Photo: Weishun Xu and Yuhao Zhang.

While the amount of light reflected at each of these interfaces is small, by combining many layers with the same properties, most of the light can be reflected away - except for that coming in at precisely the right angle and polarisation. Co-author Yichen Shen said that by using a stack of about 80 alternating layers of precise thickness, “we are able to reflect light at most of the angles, over a very broad band [of colours]: the entire visible range of frequencies”.

The system was demonstrated in a video released by MIT, which shows the full process of the experimental set-up. Shen placed the sample structure in a transparent beaker, which was filled with liquid. Behind the beaker he placed a picture of a smiley face, which was blocked by the sample. The sample is then set to rotate, reflecting everything around the lab as it does so, until, at a certain angle, the smiley face begins to show through, eventually becoming completely visible as the sample achieves full transparency. Once the sample rotates further, it turns back into a mirror.

While the researchers’ experiments were conducted using layers of glass and tantalum oxide, Shen says in principle, any two materials with different refractive indices could be used. Furthermore, the angular selectivity (10° in the MIT experiments) could be made narrower simply by adding more layers to the stack, according to the researchers.

Seen from above, two white beams reaching the sample material either pass through or are reflected, because of a slight difference in the angle of approach. Photo: Weishun Xu and Yuhao Zhang.

The team said the breadth of the system could open up many potential applications, with Shen suggesting the field of energy and solar thermophotovoltaics. The system could harness solar energy by using it to heat a material, which in turn radiates light of a particular colour. That light emission can then be harnessed using a photovoltaic cell tuned to make maximum use of that colour of light. For this approach to work, it would be essential to limit the heat and light lost to reflections.

The findings could also prove useful in optical systems, such as microscopes and telescopes, for viewing faint objects that are close to brighter objects - for example, a faint planet next to a bright star. By using a system that receives light only from a certain angle, such devices could have an improved ability to detect faint targets. The filtering could also be applied to display screens on phones or computers, so only those viewing from directly in front could see them.

“We are excited about this,” said Soljačić, “because it is a very fundamental building block in our ability to control light.”