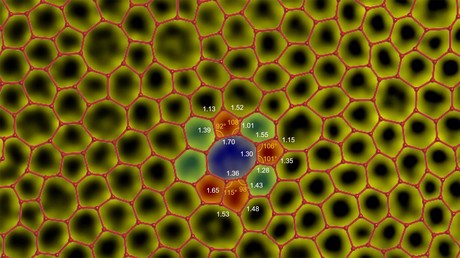 A research team led by the National University of Singapore (NUS) has synthesised what is claimed to be the world’s first one-atom-thick amorphous material. Previously thought to be impossible but now described in the journal Nature, the discovery of monolayer amorphous carbon (MAC) could finally settle a decades-old debate of exactly how atoms are arranged in amorphous solids, and open up potential applications.

In the study of amorphous materials, there are two opposing groups. One says that it is possible for materials to have a fully disordered, completely random structure. The other says there is always nanometre-sized order of tiny crystallites, surrounded by random disorder.

The newly synthesised MAC films show the latter arrangement. The researchers see nanometre-sized patches of strained and distorted hexagonal carbon rings, but there is random disorder between these patches. Hence, the MAC films also contain five-, seven-, and eight-membered rings too.

These atomically thin sheets of amorphous carbon are synthesised by using a laser vaporising a carbon-containing precursor gas into an atomically fine mist. This turns the carbon precursors into highly reactive, energetic species which immediately form a MAC film when they hit the surface of almost any substrate.

Despite having a disordered atomic structure, MAC is capable of some incredible behaviour. As noted by Dr Toh Chee Tat, first author of the study, “What is amazing about MAC is that it exhibits some properties that are totally different from traditional monolayer materials.”

One such property is that MAC films can be ‘plastically deformed’. This means that they can be stretched into irregular shapes, and stay conformed to that position. There is no other single-layer material in existence that displays significant plastic deformation — so the fact that MAC behaves this way, compared to nanometre-thick crystalline materials that would easily snap when stretched, significantly expands the number of industrial applications it could be suitable for.

Holes can even be punched into the material, or it can be torn, and yet the film will retain its key properties. MAC can also be grown on many different substrates, including copper, gold and stainless steel.

“Everything that is understood from atomically thin crystals — in terms of their properties and how they are analysed — does not apply here,” said Dr Toh. “It is a completely new material that we are studying.”

The breakthrough was led by Professor Barbaros Özyilmaz, Head of NUS Materials Science and Engineering. He said, “With MAC, we have shown for the first time that fully amorphous materials can be stable and free-standing in single atomic layers. Amorphous materials are of great technological importance, but surprisingly, they remain poorly understood from a basic science point of view. This breakthrough allows for direct imaging to reveal how atoms are arranged in amorphous materials, and could be of commercial value for batteries, semiconductors, membranes and many more applications.

“MAC is much more hardy and cheaper to make than conventional crystalline two-dimensional films. The laser-assisted deposition process through which MAC is synthesised is already commonly used in industry. Hence, we can grow a large-area, defect-free, monolayer film on a wide variety of substrates with high throughput and at low temperature.”

This makes MAC a potential low-cost material to address industry needs, and for some applications it may be an alternative to two-dimensional crystals such as graphene. For example, ultrathin barrier films are sorely needed in many industries — for next-generation magnetic recording devices, copper interconnects, flexible displays, fuel cells, batteries and other electronic devices. However, the performance of conventional amorphous thin films is poor when made very thin, and other atomically thin films cannot be produced according to stringent industry standards without compromising their qualities.

“Our monolayer amorphous films not only achieve the ultimate thickness limit, but also do not compromise on uniformity and reliability, and are generally considered viable for industry,” said Prof Özyilmaz. He and his team were recently awarded a grant under the National Research Foundation Singapore’s Competitive Research Programme to investigate the properties of monolayer amorphous materials, and will be collaborating with industrial partners to accelerate the commercialisation of materials such as MAC.

Image caption: The amorphous structure has widely varying atom-to-atom distances, unlike crystals. This is because of the random arrangement of five-, six-, seven- and eight-carbon rings in a planar carbon network, leading to a wide distribution of bond lengths (in Å) and bond angles. Image credit: National University of Singapore.