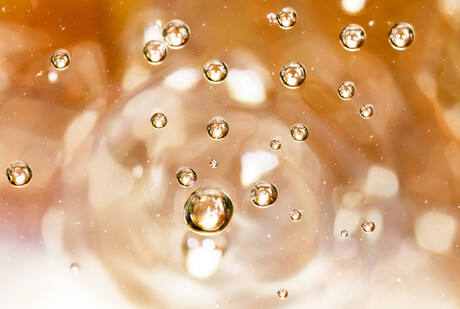 Physicists from Germany and Sweden have examined a special system of colloidal particles, activated by laser light, which can act as an internal motor for self-propelling droplets. They describe these so-called ‘droploids’ in the journal Nature Communications.

The researchers from Heinrich Heine University Düsseldorf (HHU), TU Darmstadt and the University of Gothenburg were conducting a research project that involved combining different atoms and larger particles and studying the effects they have on each other. The researchers extended this general principle of combination to include additional feedback processes, thus creating new kinds of dynamic structures referred to as ‘positive feedback loops’.

Specifically, they combined two different types of colloid particles in a water-lutidine heat bath. They irradiated the bath with lasers, and the light from the lasers brought the liquid near the particles to the critical point. The fluctuations are particularly strong at this point, allowing droplet-like structures to form that in turn surround the particles.

Inside the droplets, the two types of colloid particles heat up to different temperatures. This results in effective forces that contradict Newton’s fundamental law of motion (actio = reactio) to propel the droplets forwards. This means that the colloid particles induce the formation of droplets that encapsulate the colloids and are in turn propelled by the particles. This feedback loop results in novel superstructures with a self-organised colloidal motor. The researchers adopted the term ‘droploids’ to describe these superstructures.

“It’s important here that the process can be controlled entirely by laser illumination,” said Prof Dr Hartmut Löwen, Head of the Institute of Theoretical Physics II at HHU. “This makes it possible to steer the system externally so that it is flexible for different applications.”

“Besides justifying a novel concept for micromotors, the droploids and the non-reciprocal interactions involved could serve as important ingredients for generating future biomimetic materials,” added Prof Dr Benno Liebchen, leader of the Theory of Soft Matter working group at TU Darmstadt.

Inspired by butterfly wings, an international research team has discovered a new way to...

Researchers make a breakthrough in droplet manipulation, discovering a way to navigate liquids on...