'Tissue on a chip' reduces need for animal testing 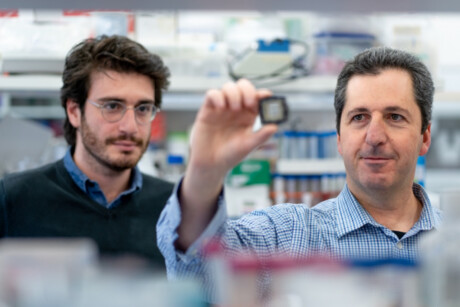 A team of researchers led by Professor Yaakov Nahmias, Director of the Grass Center for Bioengineering at The Hebrew University of Jerusalem and founder of Tissue Dynamic, have introduced a new technological approach that has the potential to rapidly develop new drugs without the need for animal experiments.

As explained by Prof Nahmias, “Drug development is a long and expensive endeavour that is defined by multiple failures. The main reason for this failure is that clinical experiments are ultimately based on minimal information gained from animal experiments, which often fail to replicate the human response.”

The primary animals used in drug development are rodents; mice and rats with different genetics, physiology and metabolism than humans leading to a situation where successful therapies in rodents often fail in clinical trials.

The Hebrew University team developed human-on-a-chip technology, using human tissues in a device, which mimics human physiology. While this type of technology has been in place for over 30 years, Prof Nahmias’s research — incorporating microscopic sensors in the human tissue itself — has enabled the team to precisely monitor the body’s response to specific drug treatments.

“What makes our technology unique is that it allows us to go beyond what was ever possible with animal experimentation,” Prof Nahmias said. “We are now able to insert microsensors that offer us real-time information on how drugs work and when they stop working.”

Utilising this new technology, the researchers were able to show that a commonly used cancer drug, cisplatin, causes a dangerous build-up of fat in human kidneys. They were then able to combine this chemotherapy with a different drug, empagliflozin (Jardiance), designed to limit the absorption of sugar in the kidneys, to reduce the fatty build-up damage and minimise the kidney damage experienced by cancer patients during therapy. This application represented the first time that the bionic chip was used to develop a drug protocol while avoiding the traditional dependence on animal testing.

“This groundbreaking technology has the potential to significantly reduce the testing and production time for drugs while also avoiding the need to test animals in the lab. This will save time, money and certainly unnecessary suffering,” Prof Nahmias said.

“Tissue Dynamic continues to develop innovative tools to aid in drug development, and we are now moving ahead with clinical testing and working towards regulatory approval of specific drugs as a new way to treat cancer.”

Image caption: Professor Yaakov Nahmias and Aaron Cohen with their tissue on a chip.

Scientists have developed a filtering technology that could help curb a drinking water-related...

Scientists have harnessed the natural ability of wood to faintly glow to develop a new...