Drug development on a chip 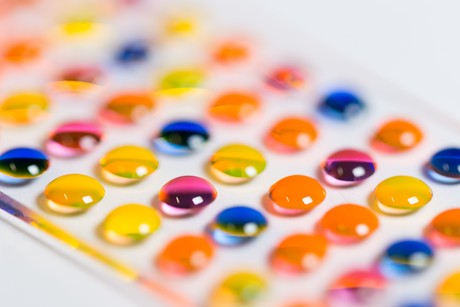 Scientists of Karlsruhe Institute of Technology (KIT) have found a way to combine the separate steps required for drug development, hence facilitating and accelerating the search for promising new substances. Their work has been published in the journal Nature Communications.

The early phase of drug development is traditionally based on three areas of science, beginning when chemists synthesise a big library of various molecules. All compounds are produced, isolated and characterised separately; then, biologists analyse the molecule library for biological activity. Highly active compounds, so-called hits, are returned to chemistry.

Based on this preselection, chemists synthesise further variations of these compounds. These secondary molecule libraries then contain optimised compounds. After this cycle has been repeated several times, a few promising compound candidates are transferred to the medical part of drug development, in which these compounds are tested in clinical studies.

Of several thousands of compounds subjected to first screenings, only one or sometimes no compound reaches the last step of drug development: approval of the new drug. This process is time-consuming and requires a large range of materials and solvents. This makes the process expensive and inefficient — often taking more than 20 years and costing between two and four billion dollars — and limits the number of substances that can be screened.

“For this reason, we have developed a platform that combines synthesis of compound libraries with biological high-throughput screening on a single chip,” said Maximilian Benz of KIT’s Institute of Toxicology and Genetics (ITG). This so-called chemBIOS platform is compatible with both organic solvents for synthesis and aqueous solutions for biological screenings.

“We use the chemBIOS platform to perform 75 parallel three-component reactions for synthesis of a library of lipids, ie, fats, followed by characterisation using mass spectroscopy, on-chip formation of lipoplexes and biological cell screening,” Benz added. Lipoplexes are nucleic acid-lipid complexes that can be taken up by eukaryotic, ie, human and animal, cells.

“The entire process from library synthesis to cell screening takes only three days and about 1 mL of total solution, demonstrating the potential of the chemBIOS technology to increase efficiency and accelerate screenings and drug development,” Benz said. Usually, such processes need several litres of reactants, solvents and cell suspensions.

The researchers have thus demonstrated the potential of chemBIOS technology to accelerate screenings and drug development, increasing efficiency and decreasing costs.

Scientists are developing a process for removing hexavalent chromium from water, with a little...