Laser vision thanks to flexible films 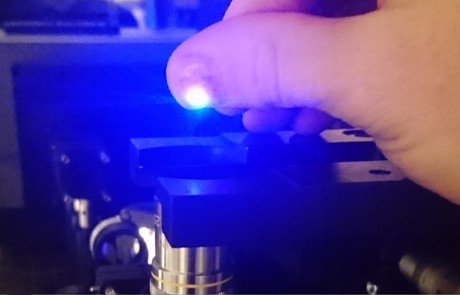 Ocular lasers, or lasers on the eyes, may now be possible with the development of an ultrathin membrane laser using organic semiconductors. Invented at the University of St Andrews and described in the journal Nature Communications, the membrane lasers could be harnessed for new applications in security, biophotonics and photomedicine.

“In ancient Greece, Plato believed that visual perception was mediated by ‘eye beams’ — beams actively sent out by the eyes to probe the environment,” said Professor Malte Gather, lead researcher on the project.

“Plato’s emission theory has of course long been refuted, but superheroes with lasers in their eyes live on in popular culture and comic books. Our work represents a new milestone in laser development.”

To add lasers to their collection of functional flexible optoelectronic devices, Professor Gather and his colleagues developed a method to lift organic membrane lasers off a supporting substrate. Less than a thousandth of a millimetre thick, the flexible membrane lasers work as freestanding films and can stick to materials including bank notes and contact lenses.

The new lasers approach the fundamental limit in specific weight and thickness, as well as impressive mechanical flexibility. They have been proven compatible with the requirements for safe operation in the human eye, with the researchers demonstrating ocular lasing using the cow eye as a model system.

The researchers have also demonstrated that the devices are mechanically robust, even when attached to another object, and that their optical properties did not change over the course of several months — even when they were not stored under ideal conditions. This could make them useful as wearable security tags, with the characteristics of the laser light potentially serving as a unique identifier.

“By varying the materials and adjusting the grating structures of the laser, the emission can be designed to show a specific series of sharp lines on a flat background — the ones and zeros of a digital barcode,” said Markus Karl, who worked on the new lasers as part of his PhD.

“[Our work] … points the way to how lasers can be used in inherently soft and ductile environments, be it in wearable sensors or as an authentication feature on bank notes,” concluded Professor Gather.

Top image: An example of the laser hitting a fingernail. Image credit: University of St Andrews.

One individual fibre is as thin as a human hair and weighs less than a fruit fly, yet is very...

How to remove air bubbles from your nanopipettes

Completely filling a nanopipette with a solution is challenging; because of the capillary force,...

Researchers have developed a self-cleaning surface that can repel all forms of bacteria,...