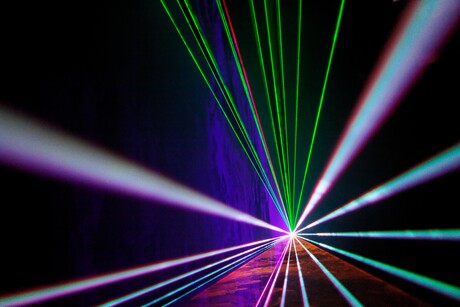 Researchers at The Australian National University (ANU) and Korea University have developed extremely powerful microscopic lasers that are even smaller than the wavelength of the light they produce.

The team used a clever trick to modify conventional lasers, which traditionally comprise some form of light amplification device placed between two mirrors. As the light bounces back and forth between the two mirrors, it becomes brighter and brighter.

Instead of mirrors, the research team created a device that works like ‘inside out’ noise-cancelling headphones and which traps energy and prevents it from escaping. The trapped light energy builds up into a strong, well-shaped laser. This trick overcomes a well-known challenge of nanolasers: energy leakage.

The researchers say their device has high efficiency — only a small amount of energy was required to start the laser shining — with a threshold about 50 times lower than any previously reported nanolaser and narrow beam. Their results were published in the journal Nature Communications.

The so-called ‘nanolasers’ also have a huge variety of medical, surgical, industrial and military uses, covering everything from hair removal to laser printers and night-time surveillance. According to lead researcher Professor Yuri Kivshar, they promise to be even more powerful than existing lasers, allowing them to be useful in smaller-scale devices.

“They can also be integrated on a chip,” said Prof Kivshar, from ANU.

“For example, they can be mounted directly on the tip of an optical fibre to lighten or operate on a particular spot inside a human body.

“This technology uses laser light instead of electronics, an approach called photonics. It’s exciting to see how this can be realised in everyday practical devices, like mobile phones.”

Prof Kivshar said the new laser builds on a quantum mechanical discovery made almost 100 years ago.

“This mathematical solution was published by Wigner and von Neumann in 1929, in a paper that seemed very strange at the time — it was not explained for many years,” he said.

Japanese scientists have developed a method for monitoring temperature using the naturally...

Long COVID: Half of patients hospitalised have at least one symptom two years on

Champagne industry to uncork big growth in next decade