Reprogrammable material gets the green light 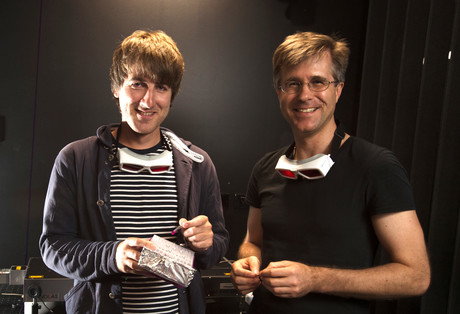 Researchers from Australia’s Queensland University of Technology (QUT), Belgium’s Ghent University (UGent) and Germany’s Karlsruhe Institute of Technology (KIT) have collaborated on a novel, dynamic, reprogrammable material with a polymer structure that can change from hard to soft and back again — triggered by nothing more than green LED light.

Described in the Journal of the American Chemical Society, the material is composed of just two inexpensive chemical compounds: naphthalene, which is well known as an ingredient in moth repellents, and the coupling molecules triazolinediones (TADs).

The researchers explained that as long as green LED light shines on their material it remains stable and strong. Once the light is off and the material is kept in darkness, the chemical bonds of the network structure break up and the material becomes soft and liquefied. This hard-to-soft process can be repeated with the flick of the switch, and the light can also be dimmed to modulate the mechanical properties of the material.

Professor Barner-Kowollik, from QUT’s Science and Engineering Faculty, said the discovery is unique in that light is used as the trigger to stabilise, rather than destroy, chemical bonds, and so the researchers have coined a new term: light-stabilised dynamic materials (LSDMs). The team said what they have achieved is the opposite of what is usually done in chemistry and that many people didn’t think it could be done.

“Typically, you use different wavelengths of light or additional heat or harsh chemicals to break up the polymer molecule chains that form a network structure,” they said.

“However, in this case, we used green LED light to stabilise the network. The trigger to break up the network, make it collapse and flow away is actually the mildest one of all: darkness. Switch the light back on and the material rehardens and retains its strength and stability.

“This is what you call an out-of-equilibrium chemical system. The constant energy of the green light keeps the chemical system in this bonded form, pushing it out of its equilibrium. Take away the light and the system goes back to its relaxed, lowest energy state.”

Prof Barner-Kowollik said the researchers have already been contacted by 3D printing technology companies interested in application of the research. He explained that 3D printing complex designs with overhangs or bridges is currently difficult or off-limits because the 3D process involves printing layer upon layer, and there is no direct support for layers in sharply angled structures.

“What you need to 3D print something like a bridge is a support scaffold, a second ink that provides that scaffold during printing of the design, but which you can later remove when it is no longer needed,” Prof Barner-Kowollik said.

“With a light-stabilised dynamic ink used as a scaffold you could 3D print under light, then switch the light off to let the scaffold ink flow away.”

He said another potential application for LSDMs is as a cell biology study tool, with biologists using it as a cell surface support they could alter by light modulation without damaging the cells.

“We are hoping to introduce LSDMs as a whole new class of materials,” said Dr Hannes Houck, who recently completed his PhD across QUT, UGent and KIT. “We debated whether to patent the new material, but decided not to wait and to publish the findings to advance knowledge and understanding of the processes involved.”

The Smart Stirrer performs the function of a conventional laboratory stir bar but also features...

Monitoring water quality from a lab in a suitcase

The suitcase lab enables screening of millions of bacteria in a single water sample, instead of...

Researchers have synthesised carbon dots from human hair waste that can detect trace amounts of...