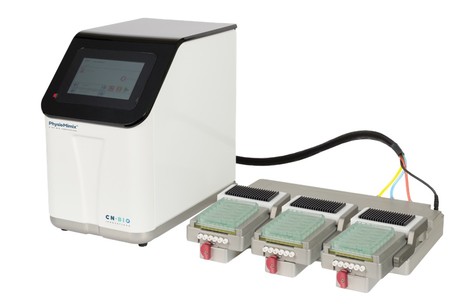 Given the flaws of animal research models and traditional in vitro experimentation, organ-on-chip studies are being hailed as the key to faster, more accurate drug development and precision medicine. They provide comprehensive, 3D tissue culture-based data and enable real-time monitoring and analysis.

CN Bio Innovations’ multiwell PhysioMimix™ Micro Physiological System (MPS) allows researchers to culture miniature models of organs in the lab using living human cells. They can then test potential therapeutics and other chemical compounds on these organ mimetics in conventional cell culture conditions without the need for animal models. The US Food and Drug Administration (FDA) is currently using the PhysioMimix organ-on-chip to evaluate drug interactions and to assess their safety.

The PhysioMimix lab benchtop device can be used to perform single-organ or multi-organ studies. Single-organ models allow detailed investigative studies of individual organ function and modelling of specific disease states. Multi-organ models give detailed information on organ-organ crosstalk, pharmacokinetics and biodistribution. These allow testing of drug effects on the targeted organ as well as off-target effects on other organs.

Its open-well plate design enables the formation of three-dimensional micro-tissues that mimic the structure and function of human organs. Cells and media can be sampled throughout experiments for analysis including biomarker assays, imaging to visualise cell morphology, cell migration and protein marker localisation.

PhysioMimix provides a versatile platform from which a vast scope of studies can be performed. These include:

Liver-on-chip and disease modelling of the liver

CN Bio’s MPS T12 plate can be used with the addition of Transwell® inserts giving the ability to perform barrier model studies. This creates a simple and adaptable MPS for modelling single cell barriers through to complex co-culture systems. The platform allows for models to be developed replicating specific barriers such as the gut, lung or skin with microfluidic perfusion generating a physiologically relevant micro-environment. CN Bio’s barrier models can be used to study drug absorption, localised and systemic toxicity and disease. They are ideally suited for a range of cell types, including primary cells, stem cells or immortalised cell-lines.

The microphysiological systems (MPS) allow researchers to set up human 3D cell culture assays and generate results quickly. The cells cultured on 3D scaffolds embedded in the wells on PhysioMimix plates are continually perfused by cell culture medium during experiments, creating optimal culture conditions for functional human organ microtissues, which allow scientists to predict the effects of compounds on human organs. PhysioMimix can be used to run 3D cell culture assays for a range of cell formats: fresh or cryo-preserved cells, pre-formed tissues or organoids, organ and tissue slices and customised or commercial inserts.

Preclinical testing traditionally occurs in simple cell culture systems or animal models to provide data about a drug’s safety and efficacy before human testing begins. However, drugs that show acceptable toxicity in these systems will often fail in human trials. Toxicology studies using PhysioMimix technology allows scientists to test new drug therapies and detect possible side effects in a human-relevant system before the drugs are tested in humans. In addition, the system can be used to determine whether a drug intended to treat one organ will have adverse effects on another as well as the effect of human-specific drug metabolites on organ toxicity.

PhysioMimix Organ-on-Chip studies can be used to analyse the metabolism of drugs, gaining insights into the rate of metabolism and the role of metabolites. The system will enable users to model a human environment generating human-specific metabolites, allowing long term cell culture of metabolically active cells and easily measurable drug levels in cells and their environment.

Researchers in biopharma, academic and regulatory laboratories globally are using PhysioMimix to study primary cells, stem cells, and organ mimetics including liver, lung, gut, heart, kidney, skin, endometrium and the brain. The Physiomimix MPS platform enables scientists working in various areas of medical research to carry out preclinical studies using human relevant models. This provides the most accurate foundation for human clinical studies and has the added benefit of reducing the requirement for animal testing.

The S-Monovette® is the revolution in blood collection.

The S-Monovette is an innovative enclosed blood collection system that allows the user to draw...

A revolution in spray drying and microencapsulation

Designing a spray drying process for heat-sensitive products has always been a big challenge.