BioGenome Project to decode the genomes of all life on Earth 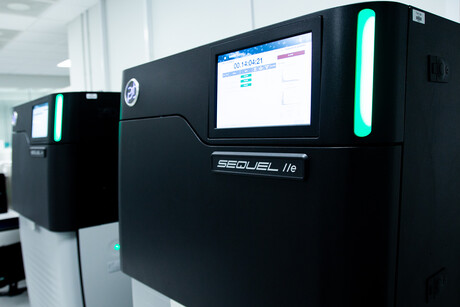 The Earlham Institute (EI) has boosted its capability in high-fidelity long-read sequencing with a twin set of the cutting-edge Pacific Biosciences Sequel IIe platforms to support the Earth BioGenome Project (EBP), providing the UK bioscience community with critical technologies for biodiversity genomics.

As the EBP is gaining momentum to sequence, catalogue and characterise the genomes of all eukaryotic biodiversity on Earth within the next 10 years, global efforts are under way to deploy the technology and infrastructure capable of rapidly delivering large numbers of high-quality genome sequences. The Sequel IIe platform is designed to empower scientists to take genomic analysis to a higher level of accuracy by producing high-fidelity long reads (hi-fi) to resolve genomes and transcriptomes.

“The Sequel IIe platforms allow us to scale up our existing infrastructure in our contribution to BioGenome sequencing,” said Dr Karim Gharbi, Head of Genomics Pipelines at the Earlham Institute. “Demand from the UK bioscience community for higher-quality genome references is growing rapidly, with requests to access hi-fi sequence data at an all-time high.

“Feedback from early adopters of the Sequel IIe across the genomics community has been extremely positive with hi-fi genomes, outperforming existing resources by at least one order of magnitude. The additional platform will immediately double our genome sequence capability, enabling continued, cost-effective access to hi-fi reads for EI researchers and UK bioscientists.”

In the past few years, the Earlham Institute has made strategic investments in genome-enabling technologies, setting the path for a new era in biology where high-quality, richly annotated genome sequences are no longer the exception but increasingly the norm. These sequencing technologies support several national and international initiatives with the Earlham Institute as a core research partner — including the Vertebrate Genomes Project, Darwin Tree of Life (DTOL) Project and European Reference Genome Atlas (ERGA) — delivering key sequencing data and analyses for a wide range of organisms, and underpinning an ambitious program to catalogue the biodiversity of single-cell eukaryotes (protists).

“The Earth BioGenome Project initiatives are highly collaborative but the technology and infrastructure capable of producing high-quality genomes at scale need to be ensured,” said Professor Neil Hall, Director of the Earlham Institute. “The additional hi-fi capacity at the Earlham Institute for the analysis of protist genomes strengthens our position in the global initiative as a leader in genome sequencing.”

According to Dr Gharbi, key to EI’s investment was the early adoption of Pacific Biosciences’ Sequel II hi-fi sequencing platform in 2019, before the institute permanently acquired the instrument with support from the UK Biotechnology and Biological Sciences Research Council (BBSRC).

“This technology allowed the institute’s researchers to secure early success in delivering high-quality genome references for key target species and establish EI as a leading centre in BioGenome research,” he concluded.

The assay is highly sensitive, with a minimum detection dose of 0.056 ng/mL, and is suitable for...

The HIVE scRNAseq Solution integrates sample storage and single-cell profiling into a complete...

How AI is shaping the future of oral wellness