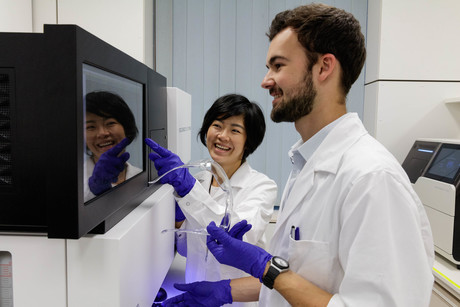 The city of Brisbane has become home to what is claimed to be the world’s most advanced genomics sequencer — a machine that could help unlock secrets to save the Reef, improve grain production, refine medical diagnostics and safeguard the health of elite athletes.

Developed by global genomics company BGI, the BGISEQ-500 genomics sequencer will operate from the company’s new Australian headquarters at the QIMR Berghofer Medical Research Institute. It is the only genomics sequencer of its kind in the Southern Hemisphere.

A ceremony was held today to mark the official launch of BGI’s new Southern Hemisphere genomics laboratory and the unveiling of the sequencer, as well as the formalising of critical research partnerships with The University of Queensland (UQ) and the University of Melbourne. Ahead of the event, BGI Executive Vice-President Duncan Yu said BGI Australia’s research will be “focused on health, medicine, environment and agriculture, due to the plentiful resources in the country, and with the strong support from our partners and integration of our expertise.

“We have made significant progress with local partners — such as QIMR, The University of Queensland, Griffith University, James Cook University, the University of Melbourne and the University of Western Australia — on topics including cancer treatment, biodiversity, infectious disease and millet breeding,” Yu said. “With the opening of our Brisbane laboratory, we look forward to building more extensive collaborations with Australian organisations to advance further innovation and deliver valuable outcomes.”

BGI will collaborate with the University of Melbourne on the building of a comprehensive, world-class program and joint centre in infectious diseases. The relationship will also include a network of international partners as well as educational exchanges between BGI and the university.

“We’re very excited about consolidating our cooperation and collaborations, which we initiated in 2009, and are focused on translating -omics research into new and improved tools to control parasitic diseases,” said Professor Robin Gasser, director of research at the University of Melbourne’s Veterinary School.

Meanwhile, UQ’s Centre for Advanced Imaging will collaborate with BGI on a project that is expected to boost the centre’s research, development and commercialisation, according to the centre’s director, Professor David Reutens.

“It will combine anatomical imaging data from Australia’s first ultrahigh-field 7T MRI with whole genome sequencing data from participants who have intractable focal epilepsy,” Professor Reutens said. “By using this approach, we aim to develop early diagnostic tools for this debilitating disease and for a range of other clinically significant disorders.”

Many of the projects to flow from BGI Australia’s arrangements with leading research and industry teams will utilise the BGISEQ-500 sequencer. From a small slide containing a sample of genetic material from any living organism — for example, coral, millet, or animal or human tissue — the device can provide a complete genetic map that allows BGI scientists to identify the important characteristics hidden inside DNA. According to BGI Australia Director Dr Bicheng Yang, the BGISEQ-500 will analyse genetic materials accurately, flexibly, effectively and at a low cost.

A portable, easy-to-use, point-of-care diagnostic system for COVID-19 can deliver patients their...