DNA test can determine the age of fish 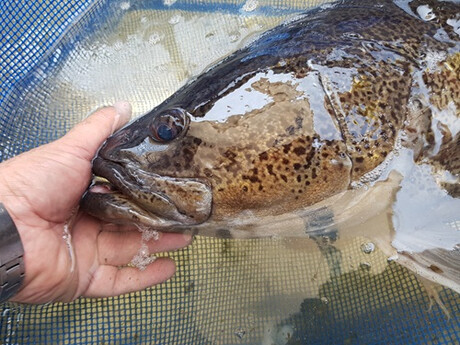 CSIRO researchers have developed a DNA test that can improve management of wild fish populations for conservation or harvest by non-lethally determining the ages of fishes.

Dr Ben Mayne, a Postdoctoral Fellow with CSIRO’s Environomics Future Science Platform, noted that knowing the ages of fish in a population is vital for their management, such as setting sustainable harvests or determining whether a species is at risk of extinction as well as understanding growth and reproduction of a species. But until now, most animals didn’t have a practical and non-lethal method to determine age; in the case of fish, scientists would have to count the growth rings in their otoliths, or ear bones, to reveal their age.

“We developed a fast, cost-effective DNA test for use with three threatened Australian freshwater species — the Australian lungfish, the Murray cod and the Mary River cod — which can also be adapted for other fish species,” Dr Mayne said.

To develop their DNA test, Dr Mayne’s team first worked with zebrafish, which have long been used to study fish biology, before calibrating their technique for threatened species using fish of known ages, bomb radiocarbon dating of scales and ages determined from otoliths. The result, described in the journal Molecular Ecology Resources, is a rapid and cost-effective method to determine the age of a fish, which is based on methylation of DNA at places in the genome known as CpG sites.

Dr David T Roberts, Senior Research Scientist at Seqwater, has been conducting research on lungfish for over a decade. He said the search for a method to age Australian lungfish has been “costly and technologically challenging”, and that the DNA-based method will “advance our understanding of lungfish population dynamics, providing a low-cost, accurate and simple method that will improve conservation efforts long into the future”.

Tom Espinoza, of Queensland’s Department of Regional Development, Manufacturing and Water, has meanwhile spent 15 years working on water planning that balances the needs of multiple stakeholders and key aquatic species in Queensland. He said the Australian lungfish, Murray cod and Mary River cod are “iconic species in Australia due to their economic, scientific and cultural value”, and that non-lethal ageing “provides an important platform from which to develop this technique across more species and improve management of the fisheries and natural resources that support them”.

This work is part of CSIRO’s ongoing research to develop ways to use DNA to measure and monitor the environment, including estimating the lifespan of vertebrate species using DNA and surveying biodiversity in seawater using eDNA.

“We are continuing to work with lungfish and cod in South East Queensland by ageing historic genetic libraries to provide detailed demographic profiles to help conserve these species,” Dr Mayne said.

Image caption: A Mary River Cod being handled to collect a fin tissue sample, to assess the population. DNA from the sample was used to estimate its age. Image ©David Roberts, Seqwater.

Artificial intelligence blood testing technology has detected over 90% of lung cancers in samples...