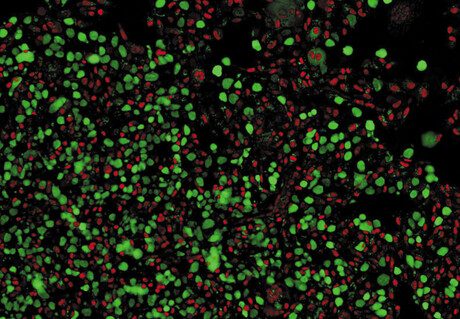 Cell-based assays have a variety of practical uses within scientific research and are an integral component of many scientists’ workflows, from testing tumour resistance for cancer research to helping identify novel therapeutic compounds in drug discovery. They are often used as an in vitro tool to measure the number of cells at different time points throughout an experiment.

For example, if a scientist is testing the efficacy of a novel compound on eradicating cancer cells, a plate reader can be used to quantify the number of living cells before and after administration of the compound. Conventional assays use a derived fluorescent signal to measure enzymatic activity as an indicator of cell viability such as adenosine triphosphate (ATP) and tetrazolium/resazurin reduction.1

Cell-based assays can also be used to measure:

There are, however, many limitations to using conventional in vitro cell-based assays which can compromise experiments and ultimately impact the clinical and translational potential of cell-based work. These include the following:

To accurately measure the number of viable cells during an experiment, it is imperative to maintain optimal physiological conditions. If any component of the extracellular medium is altered accidentally, cell viability can change without the scientist’s knowledge and independent of intentional experimental manipulations.

Different cell types have variable dynamics in cell proliferation and other biological processes, which can confound the reproducibility of experiments.

These assays require multiple rounds of experiments, continuous monitoring and manual handling by the scientist - which greatly increases the risk of error and the likelihood that the experiment will need to be replicated.

Recent advances in cell-based technology mitigate some of these roadblocks by utilising real-time and automated imaging software. The main advantage of automated imaging is that it eliminates the need for user intervention, which helps ensure that biological samples remain intact and physiological conditions remain constant throughout experiments. Perhaps most important, novel platforms consider the complexity of biological processes by cytometry, which not only measures cell survival, but also cell morphology, size and cell cycle phase. Detecting parameters such as these can be extremely informative, for example, in measuring cancer metastasis.3 In addition, large cell populations usually have significant heterogeneity in gene expression, and the sensitivity of automated real-time imaging platforms can capture this heterogeneity to give scientists a much more comprehensive analysis.4

Tecan’s new Spark Cyto technology revolutionises in vitro cell viability assays by semi-automating traditionally labour-intensive experiments. The technology is equipped with multimodal detection software and fluorescent imaging technology to allow for simultaneous visual and functional measurements. Researchers can cleanly record the entire area of a 96- or 384-well microplate in one single image (Figure 1) without tilting or distortion, so that they never miss a crucial moment or component of the cell population. Being able to capture a full well with a single image provides researchers with the whole story. With three magnification levels and four channels for fluorescent and bright field imaging capabilities, researchers can be confident in the quality of their cell analysis. Spark Cyto has LED-based illumination with a reliable autofocusing system giving the experimenter confidence that they can walk away from long experiments.5 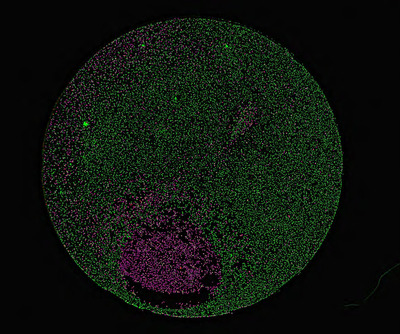 Additionally, optimal conditions are maintained during experiments due to several automated parameters. To reduce the risk of sample contamination and eliminate the need for manual intervention, the Spark Cyto has uniform temperature control of up to 42°C, dynamic gas control for CO2 and O2, and a humidity cassette with the patented Lid Lifter to reduce evaporation in the microtitre plate.

The sensitivity of the Spark Cyto for standard detection modes enables it to measure DNA, RNA, and ELISA results.5 This is important as routine assays fail to acknowledge the complexity of human pathophysiology, for example cancer metastasis, and only focus on physical translocation of cells.4

Malfunction in cellular processes, and even healthy biology, is also extremely intricate therefore it is crucial for scientists to be able to extract a large amount of information from their cell population aside from merely cell survival.

Scientists can use Spark Cyto for many common cytometric assays, including:

In addition to stabilising the physiological environment, some of the greatest challenges that scientists face during experiments include sample contamination and manual error. These can be mitigated by SparkControl software.

Perhaps most captivating is SparkControl software’s ability to automate long-term kinetic assays, providing scientists with a hands-off solution for complex experiments. For example, if an experiment requires the addition of a certain reagent at a specific time point, SparkControl allows this to be triggered automatically. The reagent dispenser (Spark injector) has heating and stirring options to minimise perturbation of the system following addition of the reagent.6

To quickly and easily detect changes in fluorescent expression of cells in the population, the 3D scanning capabilities allow simultaneous excitation and emission scans. Using Spark Cyto’s extended dynamic range, experimenters can be sure that even a very low signal of fluorescent expression will be detected. In addition, researchers have the flexibility to use the SparkControl software solely for its imaging capabilities, or for both imaging and detection analysis.6

Spark Cyto brings many advancements to the world of in vitro cell-based assays by utilising innovative imaging technology and maintaining pristine experimental conditions to ensure reproducibility and validity of experiments. It is now possible to detect and analyse an unprecedented range of biological processes in a single experiment. These major improvements from traditional cell-based assays may be the impetus that will propel scientists to uncover many cutting-edge discoveries.

Dilution of highly concentrated samples and replicate counts at low cell concentrations are no...