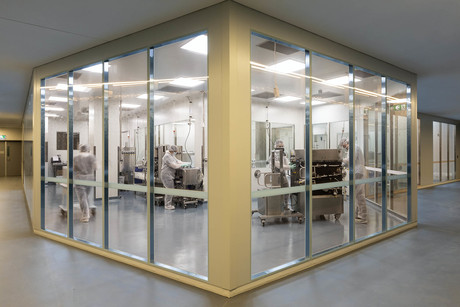 The University of Technology Sydney (UTS) has opened the doors of its new Biologics Innovation Facility (BIF) — a training and production facility that seeks to enable new biotech discoveries as well as to drive the jobs of the future.

The idea for the facility originally came from Ireland, where Professor Peter Ralph, Executive Director of the UTS Climate Change Cluster (C3), saw the positive impact of the National Institute for Bioprocessing Research and Training (NIBRT) — a world leader in the field of biopharma training — on industry and the economy. Prof Ralph explained, “This is what we had been talking about as a training facility at UTS, to transform Australian industries.”

Now the idea has finally been brought to fruition, thanks to $1.2 million in funding from the National Collaborative Research Infrastructure Strategy, initial seed funding of $750,000 from the NSW Boosting Business Innovation Program, significant investment from UTS itself and a burgeoning partnership between the university and GE Healthcare — all resulting in a 430 m2 underground facility focused on the emerging field of biologics.

A biologic drug is produced from living organisms or contains components of living organisms — it can be composed of sugars, proteins, nucleic acids or complex combinations of these substances, or may be living cells or tissues. Biologics have revolutionised the treatment of cancer and other diseases, including autoimmune diseases like rheumatoid arthritis.

The downside of biologics is that they are much more expensive to produce than drugs made from chemicals. The BIF hopes to help bring these costs down by producing small volumes of new technology-based biologics, establishing what works and passing that knowledge on so that full-scale production systems can be designed. But before it can produce these new biologics, the BIF needs scientists to help create them.

“Australia has a massive opportunity to lead in development of the next generation of biotech and precision medicines,” added Professor Dianne Jolley, UTS Dean of Science. “The pharma/bioprocessing industry needs trained workforce and upskilling programs to meet changing needs and demand for the future. The flexibility of the Biologics Innovation Facility enables UTS to offer that training and research development.”

The BIF houses a series of clean rooms and containment laboratories that are expected to transform professional training in Good Manufacturing Practice (GMP), the essential industry standard for the sector; it is thus also known as the GMP Lite facility. Here, laboratory and factory technicians will be trained in bioprocessing techniques, and their use in a GMP environment, to retain a future workforce for the growing number of biopharma players in Australia. The facility will also offer a suite of courses direct from the NIBRT as of January 2020 — the only South East Asian node to do so, according to Prof Jolley.

GE Healthcare meanwhile serves as commercial supplier of GMP research and production equipment for the BIF and even has its own space within — the GE Healthcare KUBio GMP-compliant prefabricated biomanufacturing facility, based on a 200 L process to produce monoclonal antibodies and other recombinant products. This area has the capability to use different mammalian expression platforms and has been futureproofed to accommodate an expansion to a 1000 L process.

“This facility is an ideal environment for both start-ups and established companies to scale and refine their processes,” said GE Healthcare Life Sciences CEO Emmanuel Ligner.

Professor Hugh Durrant-Whyte, NSW Chief Scientist and Engineer, added that the BIF represents engagement between academia and industry, so it’s not just about university research and university training. He said, “It’s about engaging with industry, and engaging in training industry, and using that facility to prototype, to explore, to start to develop new products that industry are genuinely engaged in.”

Other areas of focus for the BIF are expected to include:

UTS Vice-Chancellor Professor Attila Brungs concluded that the BIF will help support the creation of jobs in highly skilled STEM-based industries, stating, “I expect this facility will be key to addressing local skills shortages and ensuring the brightest and most talented scientists and engineers stay locally, allowing Australia to capture a multibillion-dollar share of a rapidly expanding biologics market while also making real-world impact in the area of biologics.

“I am excited to see what can be achieved as biologic research begins to unlock some of the most complex healthcare issues facing our world.”