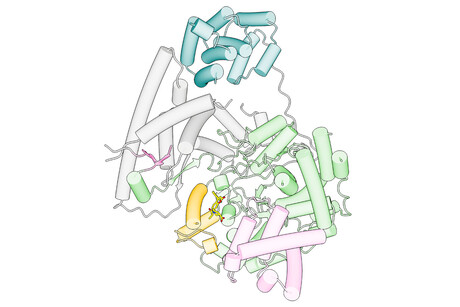 German and Swedish researchers have found that a newly developed compound starves cancer cells by attacking their ‘power plants’, by preventing the genetic information within mitochondria from being read. Their findings have been published in the journal Nature.

Mitochondria provide our cells with energy and cellular building blocks necessary for normal tissue and organ function. For a long time, the growth of cancer cells was assumed to be independent of mitochondrial function; however, this longstanding dogma has been challenged in recent years, as cancer stem cells are highly dependent on mitochondrial metabolism.

“We managed to establish a potential cancer drug that targets mitochondrial function without severe side effects and without harming healthy cells,” said Max Planck’s Nina Bonekamp, a co-lead author on the new study.

Mitochondria contain their own genetic material, mitochondrial DNA molecules (mtDNA), whose gene expression is mediated by a dedicated set of proteins. One such protein is the enzyme ‘mitochondrial RNA polymerase’, or POLRMT.

“Previous findings of our group have shown that rapidly proliferating cells, such as embryonic cells, are very sensitive to inhibition of mtDNA expression, whereas differentiated tissues such as skeletal muscle can tolerate this condition for a surprisingly long time,” said Nils-Göran Larsson, head of the research team, from Max Planck and the Karolinska Institute. “We reasoned that POLRMT as a key regulator of mtDNA expression might provide a promising target.”

In collaboration with the Lead Discovery Center, a translational drug discovery organisation established by Max Planck Innovation, the research team designed a high-throughput test method for identifying a chemical compound that inhibits POLRMT. The POLRMT inhibitor strongly decreased cancer cell viability and tumour growth in tumour-bearing mice, but was generally well tolerated by the animals.

“Our data suggest that we basically starve cancer cells into dying without large toxic side effects, at least for a certain amount of time,” said Bonekamp. “This provides us with a potential window of opportunity for treatment of cancer.

“Another advantage of our inhibitor is that we exactly know where it binds to POLRMT and what it does to the protein. This is in contrast to some other drugs that are even in clinical use,” she continued. With the help of the Max Planck Institute for Biophysical Chemistry and Max Planck spin-out Acus Laboratories, the team identified the chemical binding site of the inhibitor and obtained structural information of the POLRMT-Inhibitor complex.

The researchers say it has been an exciting journey to translate basic findings into a potential drug, and they are excited about the possibilities that their findings will open up.

The first doses of AstraZeneca's COVID-19 vaccine have arrived in Sydney, and new data...