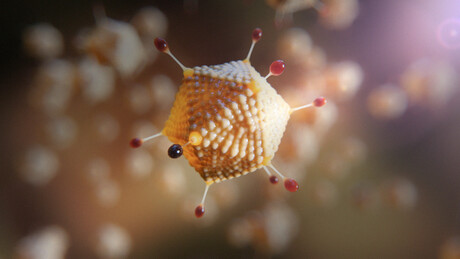 The University of Oxford and AstraZeneca have announced interim Phase 3 trial data showing that the vaccine candidate AZD1222 (also known as ChAdOx1 nCoV-2019) is effective at preventing COVID-19 and offers a high level of protection.

The vaccine is made from a weakened version of a common cold virus (adenovirus), which has been genetically changed so that it is impossible for it to grow in humans. Adenovirus vaccines have been used extensively for decades and have the significant benefit that they are stable, easily manufactured, transported and stored at domestic fridge temperature (2–8°C). This means they can be easily distributed using existing medical facilities such as doctor’s surgeries and local pharmacies, allowing for the vaccine, if approved, to be deployed very rapidly.

The interim analysis included data from a Phase 2/3 trial in the UK and a Phase 3 trial in Brazil. Over 23,000 participants are being assessed following two doses of either a half-dose/full-dose regimen or a regimen of two full doses of AZD1222 or a control. The global trials are evaluating participants aged 18 years or over from diverse racial and geographic groups who are healthy or have stable underlying medical conditions. Clinical trials are also being conducted in the US, Japan, Russia, South Africa, Kenya and Latin America, with planned trials in other countries and up to 60,000 participants expected to be enrolled.

An independent Data Safety Monitoring Board determined that the analysis met its primary endpoint showing protection from COVID-19 occurring 14 days or more after receiving two doses of the vaccine. No serious safety events related to the vaccine have been reported, with AZD1222 well tolerated across both dosing regimens. There were a total of 131 COVID-19 cases in the interim analysis.

“These findings show that we have an effective vaccine that will save many lives,” said Professor Andrew Pollard, Chief Investigator of the Oxford Vaccine Trial. “Excitingly, we’ve found that one of our dosing regimens may be around 90% effective and if this dosing regime is used, more people could be vaccinated with planned vaccine supply.”

AstraZeneca will now immediately prepare regulatory submission of the data to authorities around the world that have a framework in place for conditional or early approval. The company will seek an Emergency Use Listing from the World Health Organization (WHO) for an accelerated pathway to vaccine availability in low-income countries. In parallel, the full analysis of the interim results is being submitted for publication in a peer-reviewed journal.

“This vaccine’s efficacy and safety confirm that it will be highly effective against COVID-19 and will have an immediate impact on this public health emergency,” added AstraZeneca CEO Pascal Soriot. “Furthermore, the vaccine’s simple supply chain and our no-profit pledge and commitment to broad, equitable and timely access means it will be affordable and globally available, supplying hundreds of millions of doses on approval.”

The company is making rapid progress in manufacturing with a capacity of up to 3 billion doses of the vaccine in 2021 on a rolling basis, pending regulatory approval.

Meanwhile, the second interim analysis of clinical trial data for Russia’s Sputnik V vaccine candidate has shown 91.4% efficacy on day 28 after the first dose and over 95% on day 42 after the first dose, according to a statement from The Gamaleya National Research Center for Epidemiology and Microbiology (Gamaleya Center) and the Russian Direct Investment Fund (RDIF).

The double-blind, randomised, placebo-controlled Phase 3 clinical trial involves 40,000 volunteers, with the vaccine’s interim efficacy calculated at three statistically significant representative checkpoints: upon reaching 20, 39 and 78 cases of novel coronavirus infection among volunteers in both the placebo group and the group that received the vaccine. The second interim analysis of vaccine efficacy was carried out after 31 cases confirmed cases were identified in the placebo group and eight cases in the vaccine group. The ratio of the placebo group to the vaccinated group is 1:3.

Evaluation of efficacy was carried out among almost 19,000 volunteers, 28 days after receiving the first dose (seven days after the second dose) of the vaccine or placebo upon reaching the second checkpoint of the trial in compliance with the clinical trial protocol. The analysis demonstrated a 91.4% efficacy rate for the vaccine. Preliminary data on volunteers on the 42nd day after the first dose (equivalent to 21 days after the second dose), when they have already formed a stable immune response, meanwhile indicates that the efficacy rate of the vaccine is above 95%.

“Gamaleya Center has developed one of the most efficient vaccines against coronavirus in the world, with an efficacy rate of more than 90% and a price that is two times lower than that of other vaccines with similar efficacy rate,” said RDIF CEO Kirill Dmitriev. “The uniqueness of the Russian vaccine lies in the use of two different human adenoviral vectors, which allows for a stronger and longer-term immune response as compared to the vaccines using one and the same vector for two doses.”

“It is very important that the second interim efficacy analysis of Sputnik V has confirmed our findings from the first stage and shown its efficacy at 91–92%,” added Gamaleya Center Director Alexander Gintsburg. “Let me stress that the second analysis was conducted a week after volunteers got the second dose, meaning that their bodies have partially reacted to both doses. We expect the efficacy rate to be even higher based on the data three weeks after the second immunisation when the body’s strongest and most stable response is achieved.

“We plan to conduct the third interim data analysis after 78 confirmed coronavirus cases among volunteers and we have every reason to believe that the results will exceed our initial expectations. The drug’s final efficacy assessment will be made available after Phase 3 clinical trials are concluded.”

Outside of Russia, Phase 3 clinical trials are ongoing in Belarus, the UAE, Venezuela and other countries, as well as Phase 2/3 in India. No unexpected adverse events have been identified as part of the research, though some participants had minor adverse events such as pain at the injection point and flu-like symptoms including fever, weakness, fatigue and headache.

“Results from the second interim analysis of the Sputnik V vaccine are in line with our expectations and predictions,” concluded Gamaleya Center Deputy Director Denis Logunov. “The vaccine’s high efficacy rate is an important indication that a stable immune response to the coronavirus infection is formed among the study’s participants. We expect that the next interim results will demonstrate Sputnik V’s positive traits, moving us closer to the study’s completion and the beginning of a mass vaccination of our fellow citizens.”