Pharmacogenomic approach to cure the pain of the 'burning man' 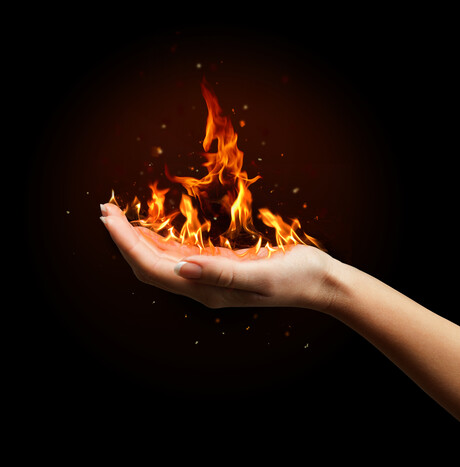 Inherited erythromelalgia is a rare and potentially devastating syndrome associated with severe burning pain in the hands and feet, creating a major unmet medical need.

More than 100 million Americans suffer from chronic pain of varying degrees, with the lack of effective but non-addictive painkillers partially contributing to the national substance abuse crisis. Potent opiates are often addictive, while other painkillers may be associated with poor tolerability, resulting in suboptimal pain control from many indications. Developing next-generation painkillers, therefore, has enormous value.

While chronic pain is often caused by injury, it can also be caused by genetic variants that naturally occurred in humans, such as in inherited erythromelalgia (IEM). Also called ‘Man on Fire’ syndrome, it is associated with chronic burning pain in the hands and feet that cannot be relieved by common painkillers. Research from my work and others has led to new insights into pain pathophysiology in patients with IEM, as well as advancements in therapy.

The pain associated with IEM is caused by a genetic mutation in the SCN9A gene, which produces a hyperactive Nav1.7 sodium channel. The Nav1.7 channel is considered a pain channel since it is directly involved in many human pain syndromes. Through extensive research, we identified more than two dozen SCN9A mutations that lead to IEM. Consequently, for these patients, one-size-fits-all pain medication does not work. Currently, IEM treatment is a matter of trial and error. One of our major research goals, therefore, was to develop a precision medicine approach to treating these patients based on their genetic background.

While most patients with IEM do not respond to any available pain medications, there are exceptions. In the clinic, it was found that patients with one particular mutation on the SCN9A gene, V400M, responded to a non-selective sodium channel blocker that is traditionally used to treat seizures called carbamazepine (CBZ). Using patch-clamp analysis, it was found that CBZ normalises activation of the hyperactive Nav1.7 mutant and therefore makes it act more like wide-type.

The responsiveness of V400M to CBZ was encouraging and motivated us to identify additional mutations that might respond to the drug. To do this, we constructed a human Nav1.7 3D structure model to locate IEM mutations. Using this approach, we identified another common IEM-associated mutation, S241T, located very close to V400M. The proximity between these two mutations led us to suspect that they may be affected by CBZ in a similar manner.

To study the functional consequence of these mutations in intact pain-sensing neurons, and to test how these neurons responded to CBZ, we used microelectrode array (MEA) technology.

An MEA is a grid of tightly spaced microelectrodes, and they’re often used in the study of neural activity or circuits. They may be placed in the brains of living animals, but they can also be embedded in the wells of a multi-well cell culture plate allowing for in vitro modelling (Figure 1).

Figure 1: (Left) Image of a neuron grown over an MEA electrode. Voltage activity from the neuron is recorded (green) and individual neural signals or action potentials (white) are automatically tracked. (Right) In an MEA culture dish, the location and time of every recorded action potential (AP) is assigned a tick mark. The relationship between tick marks (or APs) reveals deep insights about how the neurons are interacting. Watch the full video here.

This arrangement allows us to culture sensory neurons in vitro and record the electrical activity noninvasively over weeks to months of these cultured pain-sensing neurons. Also, this technique enables us to grow replicates of the culture and simultaneously test multiple genetic, pharmacological and environmental manipulations (Figure 2). For example, we could study multiple mutations at once, and since IEM is triggered by warmth, we could also test the effect of temperature on the model using a built-in precise temperature control of the MEA system.

Using this MEA system, we performed experiments to address our main question: can we develop a personalised medicine approach to guide the drug selection process for IEM patients based on their genetic background?

We grew neuron cultures harbouring one of several IEM-associated mutations. In neurons featuring the S241T mutation, CBZ significantly reduced the firing frequency, as well as the number of active DRG sensory neurons, when compared to vehicle treatment. We found this difference to be statistically significant. Conversely, when we performed this same test on a different F1449V mutation, we found that CBZ does not have a major effect on these neurons. 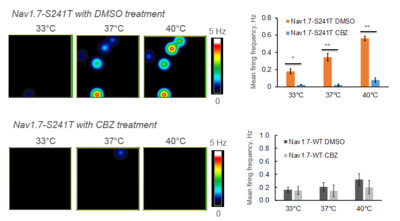 Figure 3: ‘Pain in a dish’. (Top row) Neurons expressing the Nav1.7–S241T mutation fire significantly more action potentials than wild-type (WT) neurons, and this effect is exacerbated with increasing temperatures. (Bottom row) When these neurons were treated with carbamazepine (CBZ), the firing frequency was greatly reduced, suggesting CBZ as a potential treatment for IEM patients with S241T mutations. Watch the webinar here.

Altogether, we demonstrated that the effect of CBZ is mutant-specific, suggesting the need for a more personalised approach towards treating IEM. The data suggests that the mutation Nav1.7–S241T may respond to CBZ.

Transferring research to the clinic

Next, we aimed to take our research findings and test them in the clinic. After a nationwide search, we identified two IEM patients carrying the Nav1.7–S241T mutation who were eager to participate in our study. Together with our colleagues, we designed a randomised, placebo-controlled double-blind crossover clinical trial for these two patients. We gave the patients either a placebo or CBZ for six weeks and we recorded their responses in several ways.

We found that CBZ reduced pain more than the placebo did. Specifically, it reduced total pain duration, episode duration and the number of times it woke the patient up during sleep. Together with our colleagues, we also performed functional MRI and found that while the patient on placebo showed brain activity in areas associated with chronic pain, the patient on CBZ showed brain activity in brain areas associated with acute pain — a pattern that indicates that CBZ affects how the brain responds to pain signals in patients harbouring the SCN9A–S241T mutation.

These results show that precision medicine, guided by genomic analysis and functional profiling, provides a promising way to transform pain treatment. With continued research and analysis, we aim to shift the paradigm of a trial-and-error approach to identify effective painkillers to a personalised medicine approach based on the genetic make-up of individual patients to treat chronic pain in the near future. 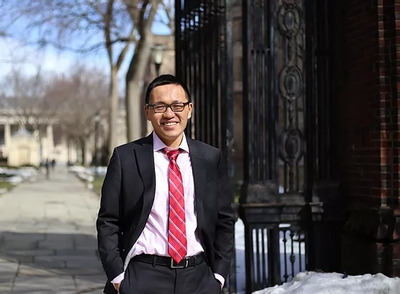 A previously unknown kind of human brain cell appears to help people centre themselves in their...

Researchers have announced a treatment that may provide an alternative, immune-based solution to...