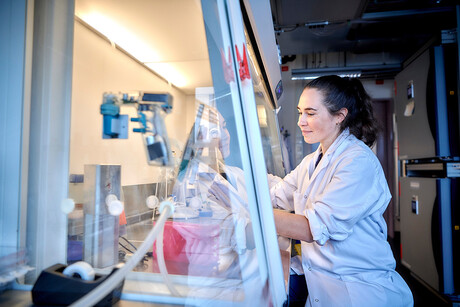 Scientists from the University of Bern have created a second-generation lung-on-chip model with life-size dimension alveoli in a stretchable membrane, made of purely biological material. Described in the journal Communications Biology, the model reproduces key aspects of the lung tissue architecture not found in previous lungs-on-chip, opening up new possibilities for basic pneumological research, understanding lung pathologies, drug screening and precision medicine.

The lung is the largest organ in the human body and plays a key role in the oxygenation of all the organs. Due to its structure, cellular composition and dynamic microenvironment, it is difficult to mimic in vitro.

A specialised laboratory at Bern’s ARTORG Center for Biomedical Engineering Research, headed by Olivier Guenat, has been developing in vitro models called organs-on-chip, focused on modelling the lung and its diseases. After a first successful lung-on-chip system exhibiting essential features of the lung, the Organs-on-Chip (OOC) Technologies laboratory has now developed a purely biological next-generation lung-on-chip in collaboration with the Helmholtz Centre for Infection Research in Germany and the Thoracic Surgery and Pneumology Departments at the University Hospital of Bern (Inselspital).

Pauline Zamprogno, who developed the new model for her PhD thesis at the OOC, summarised its characteristics. “The new lung-on-chip reproduces an array of alveoli with in vivo-like dimensions,” she said. “It is based on a thin, stretchable membrane, made with molecules naturally found in the lung: collagen and elastin. The membrane is stable, can be cultured on both sides for weeks, is biodegradable and its elastic properties allow mimicking respiratory motions by mechanically stretching the cells.”

In contrast to the first generation, the system reproduces key aspects of the lung extracellular matrix (ECM): its composition, its structure and its properties. Additionally, the fabrication process is simple and less cumbersome than that of a polydimethylsiloxane stretchable porous membrane from the first-generation lung-on-chip.

Cells to be cultured on the new chip for research are currently obtained from cancer patients undergoing lung resections at the Inselspital Department of Thoracic Surgery. Department Head Ralph Schmid sees a double advantage in the system.

“The second-generation lung-on-chip can be seeded with either healthy or diseased lung alveolar cells,” Schmid said. “This provides clinicians with both a better understanding of the lung’s physiology and a predictive tool for drug screening and potentially also for precision medicine, identifying the specific therapy with the best potential of helping a particular patient.”

“The applications for such membranes are broad, from basic science investigations into lung functionalities and pathologies, to identifying new pathways, and to a more efficient discovery of potential new therapies,” added Thomas Geiser, Head of the Department of Pneumology at the Inselspital and Director of Teaching and Research of the Insel Gruppe. 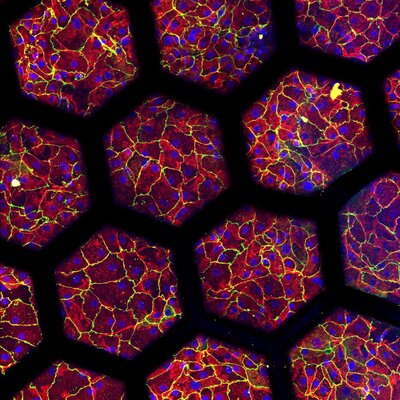 Alternative to animal models in research

As an additional plus, the new lung-on-chip can reduce the need for pneumological research based on animal models.

“Many promising drug candidates successfully tested in preclinical models on rodents have failed when tested in humans due to differences between the species and in the expression of a lung disease,” Guenat noted. “This is why, in the long term, we aim to reduce animal testing and provide more patient-relevant systems for drug screening with the possibility of tailoring models to specific patients (by seeding organs-on-chip with their own cells).”

The new biological lung-on-chip will be further developed by Zamprogno and her colleagues from the OOC Technologies group to mimic a lung with idiopathic pulmonary fibrosis (IPF), a chronic disease of the lung leading to progressive scarring of the lung tissue.

“My new project consists in the development of an IPF-on-chip model based on the biological membrane,” Zamprogno said. “So far, we have developed a healthy air–blood barrier. Now it’s time to use it to investigate a real biological question.”

How quickly can we decarbonise building & construction and localise supply chains?