Strength training can protect the brain from degeneration 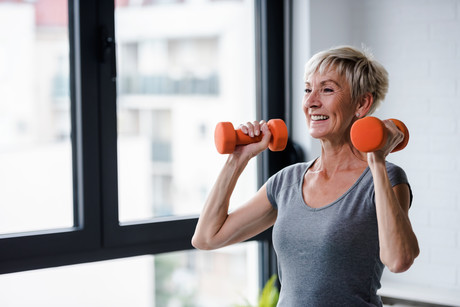 A research team led by the University of Sydney has found that six months of strength training (lifting weights) can help protect brain areas especially vulnerable to Alzheimer’s disease up to one year later, with the results of their study published in the journal NeuroImage: Clinical.

In a clinical trial for older people with mild cognitive impairment, study participants were randomly allocated to do computerised brain training, strength training, or combined computer and strength training. They did this for just six months, followed by their usual activity for 12 months.

In the control condition, where no strength training was undertaken hippocampal subregions shrunk by 3–4% over the 18 months. Those undergoing strength training saw only 1–2% reductions, and in some areas none at all.

“Our research shows that strength training can protect some hippocampal subregions from degeneration or shrinkage for up to 12 months after the training has stopped,” said Dr Kathryn Broadhouse, now based at the University of the Sunshine Coast, who led the analysis while at the University of Sydney.

To arrive at their conclusions, the team conducted MRI brain scans of the participants three times over an 18-month period and used some of the latest advances in image analysis to quantify changes to subregions within the hippocampus. Dr Broadhouse noted, “Hippocampal segmentation is difficult because the borders between structures are sometimes unclear and even anatomists will debate where to draw the line, so we restricted our analysis to those subregions where the data is consistent.”

Senior author Professor Michael Valenzuela, leader of the Regenerative Neuroscience Group at the University of Sydney’s Brain and Mind Centre, believes the finding should change the dementia prevention message.

“This is the first time any intervention, medical or lifestyle, has been able to slow and even halt degeneration in brain areas particularly vulnerable to Alzheimer’s disease over such a long time,” Prof Valenzuela said.

“Given this was also linked to protection from cognitive decline, the message is clear: resistance exercise needs to become a standard part of dementia risk-reduction strategies.”

But what if patients are already in the early stages of Alzheimer’s disease? Recent reports have shown that early diagnosis can reduce the risk of suffering by one-third, but this remains a challenge due to the low accuracy and high cost of current diagnostic methods. Now, researchers at the Korea Advanced Institute of Science and Technology (KAIST) have created a clinically accurate multiplexed electrical biosensor for detecting Alzheimer’s disease by measuring its core biomarkers using densely aligned carbon nanotubes.

Writing in the journal Nature Communications, the researchers described the ultrasensitive detection of multiple Alzheimer’s disease core biomarkers in human plasma. The team designed the sensor array by employing a densely aligned single-walled carbon nanotube thin film as a transducer.

The representative biomarkers of Alzheimer’s disease are beta-amyloid42, beta-amyloid40, total tau protein and phosphorylated tau protein; the concentrations of these biomarkers in human plasma is directly correlated with the pathology of Alzheimer’s disease. The research team developed a highly sensitive resistive biosensor based on densely aligned carbon nanotubes fabricated by the Langmuir–Blodgett method with a low manufacturing cost.