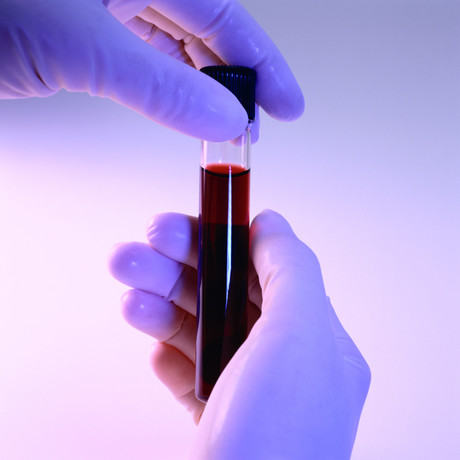 The Olivia Newton-John Cancer Research Institute (ONJCRI) is using blood test technology from Bio-Rad Laboratories to detect and analyse cancer genes in melanoma patients. The blood test, called a ‘liquid biopsy’, is essentially a blood sample that researchers can use to detect fragments of circulating tumour DNA that carries certain mutations in the BRAF gene.

For advanced (Stage 4) melanoma, it is critical that a patient is treated as soon as possible. But finding out if a patient has a BRAF V600E or BRAF V600K mutation from a tissue biopsy takes between usually 2–3 weeks. A liquid biopsy can provide the same information in less than three days — or even within 24 hours in urgent cases. And if a patient tests positive for the gene mutation, their doctor can prescribe a drug that targets the mutated BRAF protein.

“These tests are done quickly, and without surgery so there is no pain and reduced anxiety for the patient,” said Professor Jonathan Cebon, medical director of the Olivia Newton-John Cancer Wellness & Research Centre (ONJ Centre) and ONJCRI. “We can make treatment recommendations sooner and we can monitor treatment response regularly rather than waiting for the next scan, which might be months away.”

The blood samples are being tested on Bio-Rad’s Droplet Digital PCR (ddPCR) system — a digital PCR method utilising a water-oil emulsion droplet system. The system partitions nucleic acid samples into 20,000 nanolitre-sized droplets, and PCR amplification is carried out within each droplet. This partitioning enables the measurement of thousands of independent amplification events within a single sample, thus determining the target DNA template concentration in the original sample. The system also has a smaller sample requirement than other commercially available digital PCR systems, reducing cost and preserving samples.

The approach is already saving lives, such as that of a patient at the ONJ Centre who was given days to live after his metastatic melanoma went into rapid decline. A liquid biopsy was taken and researchers performed the blood test in less than six hours. The results enabled Professor Cebon to prescribe a drug that immediately inhibited the growth of the cancer.

The use of liquid biopsies in the clinic is anticipated to increase with the rise of personalised medicine, helping clinicians to obtain more information about their patients and thus be more precise in their treatment recommendations. Professor Cebon said, “We expect to see liquid biopsy become a standard option for a number of cancer types in the next few years.”

The research institute has now become the first laboratory in Australia to be NATA accredited for the blood test technology. Doctors and medical oncologists can order the test from anywhere in Australia.