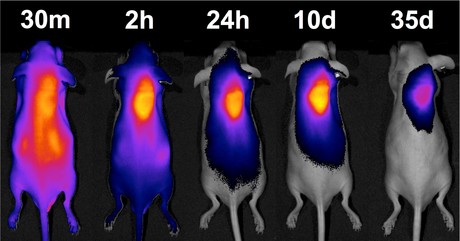 US scientists have added a ‘homing beacon’ to tumours, in the form of an injectable hydrogel, that attracts chemotherapy medicines towards cancer cells while sparing their normal counterparts. The treatment has been tested in mice and described in the journal ACS Central Science.

Scientists have previously tried to target chemotherapy drugs to tumours by attaching antibodies that bind to proteins expressed on the cancer cells’ surfaces; however, less than 1% of the administered drug actually ends up at the tumour site. Matthew Webber and his colleagues at the University of Notre Dame decided to take a different approach: using cucurbituril to target therapies to a tumour.

Cucurbituril is a pumpkin-shaped molecule that can capture certain chemicals within its central cavity. If researchers could inject cucurbituril near a tumour, and then attach targeting chemicals to chemotherapy drugs, they might be able to retain the drugs at the tumour site through these interactions. Then, the abnormally acidic microenvironment of the tumour would rupture the linkage between the drug and the targeting chemical, unleashing the therapy to kill cancer cells.

To test their approach, Webber and his colleagues first injected a hydrogel containing cucurbituril under mice’s skin. They attached a dye to the targeting molecule so they could easily track it, and then injected that into the mice’s bloodstream. They found that 4.2% of the injected dye ended up in the hydrogel, which is much higher than previously reported antibody approaches. The mice quickly excreted the majority of the dye that was not bound to the hydrogel.

When the team injected the hydrogel adjacent to tumour xenografts in mice and then administered the cancer drug doxorubicin attached to the targeting molecule, the mice’s tumours showed much slower growth, and the mice had fewer side effects than those given unmodified doxorubicin. The hydrogel also persisted in the mice’s body for more than 45 days, which could allow for repeated doses of chemotherapy drugs or for the use of different drugs with the same targeting molecule.

Image caption: In mice, the hydrogel recruits a dye-labelled molecule (coloured areas) to its location, showing its potential for being a ‘homing beacon’ for cancer drugs.