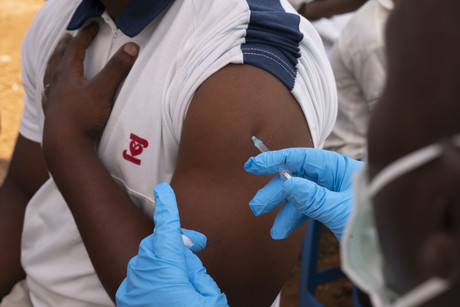 The European Medicines Agency (EMA), the European agency responsible for the scientific evaluation of medicines developed by pharmaceutical companies, has announced its recommendation of a conditional marketing authorisation for the rVSV-ZEBOV-GP vaccine, which has been shown to be effective in protecting people from the Ebola virus.

The EMA announcement is a key step before the European Commission’s decision on licensing. In parallel, the World Health Organization (WHO) will move towards prequalification of the vaccine.

Over the past five years, WHO has convened experts to review the evidence on various Ebola vaccine candidates, informed policy recommendations and mobilised a multilateral coalition to accelerate clinical evaluations. The EMA review was unique in that WHO and African regulators actively participated through an innovative cooperative arrangement put in place by WHO, which will help accelerate registration for the countries most at risk.

A randomised trial for the vaccine began during the West Africa Ebola outbreak in 2015. When no other organisation was positioned to run a trial in Guinea during the complex emergency, the government of Guinea and WHO took the unusual step to lead the trial, while a global coalition of funders and researchers provided the critical support required.

The trial was successfully run using an innovative ring vaccination design, which helped to eradicate smallpox in the 1970s but was here used for the first time to evaluate an experimental vaccine. A roadmap aiming to accelerate prequalification and coordinate actions and contributions to the licensing and rollout of the rVSV-ZEBOV-GP vaccine in African countries has also been developed.

“The conditional authorisation of the world’s first Ebola vaccine is a triumph for public health, and a testimony to the unprecedented collaboration between scores of experts worldwide,” said WHO Director-General Dr Tedros Adhanom Ghebreyesus. “My deepest gratitude is to the studies’ volunteers, researchers, health workers in Guinea, other countries and the Democratic Republic of the Congo who have put themselves at risk to ensure people are protected with this vaccine.”

The latest announcement will not have an immediate effect on how the vaccine is accessed or administered in the Democratic Republic of the Congo, as licensing has not yet occurred, and licensed doses will only be available mid-2020. The vaccine will continue to be used in the country under a research protocol (also known as ‘expanded access’ or ‘compassionate use’) and with the ring vaccination strategy.

“This vaccine has already saved many lives in the current Ebola outbreak, and the decision by the European regulator will help it to eventually save many more,” said Dr Tedros. “I am proud of the role WHO has played, from supporting the research, to conducting the trial in Guinea in 2015.”