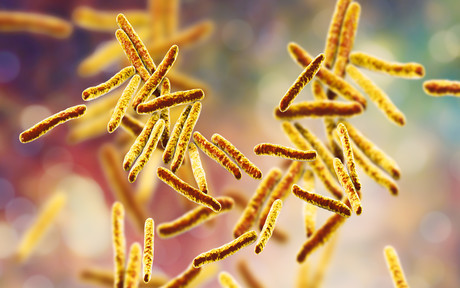 The world’s most widespread infectious disease, TB is currently treated by antibiotics — but treatment is a long and complicated process that involves the use of multiple drugs over a period of up to two years. And as the number of antibiotic-resistant TB bacteria increases, so too does the need for an alternative treatment method.

“Despite the long treatment period, last year it was possible to save only 54% of the patients who had antibiotic-resistant bacteria,” said Gabriela Godaly, a senior lecturer at Lund University. “So there is a strong need for alternative treatments to prevent the spread of the disease and to reduce the associated mortality.”

Antimicrobial peptides (AMPs) have recently emerged as promising alternatives, as they are produced by all organisms — from plants to mammals — and act as nature’s own antibiotics, killing bacteria rapidly. The major advantage of AMPs is that bacteria find it more difficult to build up a resistance to the peptides, as these have more mechanisms than antibiotics to kill bacteria. Another advantage is that there are AMPs that can reduce inflammation and thus prevent damage to tissue during treatment.

Several AMPs have previously been tested against TB bacteria without success, as they have either been toxic to human cells or not sufficiently stable. But when the researchers screened different antimicrobial peptides’ ability to prevent the growth of the TB bacteria Mycobacterium tuberculosis, they found promising properties in a peptide from a fairly common fungus — the ebony cup (Pseudoplectania nigrella).

“When we investigated different peptides, we found one called NZX that is not toxic to our cells, but kills tuberculosis bacteria even at low concentrations,” said Godaly. “The peptide could also prevent lung damage during tuberculosis infection.”

The study was carried out on human cells in vitro and later verified in animal models using mice, with the results published in the journal Tuberculosis. The researchers are now seeking to optimise NZX’s properties for use as a future antibiotic, studying how it works against tuberculosis bacteria in combination with current antibiotics (rifampicin, isoniazid, pyrazinamide, ethambutol and streptomycin) in the hope of shortening TB treatment.

“We could show that NZX acts against several clinical strains of tuberculosis bacteria,” said Godaly. “The therapeutic potential of the peptide is further supported in animal models in which NZX significantly reduced the volume of bacteria after only five days of treatment.

“Although it’s a big step from mice to humans, we have great hopes for future patient studies, as the verified results in the animal studies were so clear.”