How the malaria parasite jumped from gorillas to humans 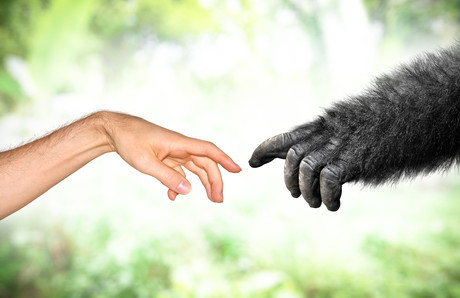 Scientists have uncovered the likely series of events that led to the world’s deadliest malaria parasite being able to jump from gorillas to humans, with the results published in the journal PLOS Biology.

Plasmodium falciparum is one of seven species of parasite that can cause malaria in a family known as the Laverania. These parasites originated in African great apes and today are restricted to their own specific host species, with three parasite species confined to chimpanzees and three to gorillas. The seventh, P. falciparum, only infects humans, after switching host from gorillas through a process known as zoonosis around 50,000 years ago.

Genome sequencing of all seven Laverania parasite species revealed a section of DNA that had transferred from a gorilla parasite, Plasmodium adleri, to the ancestor of P. falciparum. This DNA sequence included a gene called rh5. This gene produces the protein RH5, which binds to a protein receptor in human red blood cells called basigin.

This RH5-basigin interaction is critical for the P. falciparum parasite to infect humans. As such, RH5 is a promising malaria vaccine target — if this interaction can be disrupted, the parasite would no longer be able to invade human red blood cells and cause malaria.

To further investigate the origin of P. falciparum, researchers at the University of Montpellier used ancestral sequence reconstruction to ‘resurrect’ the RH5 DNA sequence that was transferred to the ancestor of P. falciparum 50,000 years ago. Synthetic copies of the ancestral rh5 gene were created by scientists at the Wellcome Sanger Institute, where the molecular interactions of the RH5 protein could be observed.

Researchers had expected that the transferred RH5 protein would bind only gorilla basigin, but remarkably this protein had the dual property of being able to bind both gorilla and human basigin. As noted by first author Dr Francis Galaway, from the Wellcome Sanger Institute, this “immediately provided a molecular explanation for how Plasmodium falciparum evolved to infect humans”.

Subsequently, the researchers were able to identify six differences between the ancestral RH5 sequence and the current sequence in P. falciparum. One of these mutations was found to result in the complete loss of the ability to bind to gorilla basigin, explaining how P. falciparum became restricted to humans.

Zoonosis occurs when pathogens that are already able to infect an animal host acquire genetic material that enables them to also infect humans. In the case of P. falciparum malaria, it is thought that the genetic transfer of the rh5 gene occurred when a gorilla cell became infected with two species of Plasmodium parasite simultaneously — an event known as an introgression. When an introgression occurs, genetic material is swapped from one species to another.

The type of introgression event that is presumed to have resulted in P. falciparum jumping from gorillas to humans is incredibly rare. Among the seven Laverania species, comparative genome analysis has revealed just a few instances over a span of around one million years where a sequence of DNA was transferred from one parasite to another.

“In the history of mankind, Plasmodium falciparum malaria has arguably been responsible for more human deaths than any other disease,” said lead author Dr Gavin Wright, from the Wellcome Sanger Institute. “So it is both important and fascinating to understand the molecular pathways that enabled this deadly parasite to infect humans.”